Friend and fellow guide Ron Y and I did a two day trip last week with  Marty, Mike, George and Mike from the New York city area.  A good time was had by all with some good fish boated in the two days that we fished with them.  Ron had Mary and Mike K. (on the left ) and I fished with George and Mike on the right.  George was a little new at it but did well as on one day he got most of the strikes.  ( lucky dude ).

We are looking forward to fishing with the New York Crew again this fall.

Long time buddy and fisherman Brian G. from St. Louis brought a couple of buddies with him to fish this week as well.

This is Scott with his first trout on a fly Rod. 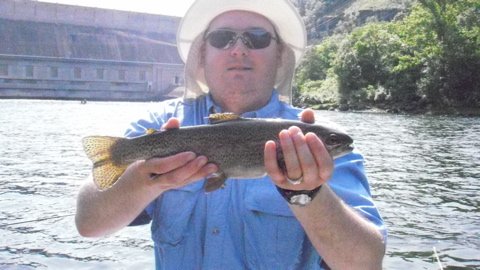 Scott learned the ways of a fly rod on a steep learning curve.  He had no choice with his brother and buddy Brian in the boat with him.  Only one major tangle in a day and a half.  Pretty good there Scott.  Keep it up.  Your gonna be good.

Low flows have continued all week with lots of fluctuation on an hourly basis.  The slimy moss continues further down stream but is fishable at times.  The caddis hatch is really winding down on the upper end and the sulpher hatch should start up if heavier generation dosn’t get in the way.  The lake level has risen sharply with last weeks rains and the level is now at 665.14 and is now 11 feet above normal pool elevation.  Looks as though we are going to have another high water summer.  I’ll take it though as the fish on the river are looking fat and happy with good color.  It’s just a matter of time though before we began to get some heavier generation patterns.  I’d like to see some flows that go from one or two units to 4 or 6 units in a hurry.  I love that type of water as it has a tendency to move some big fish and put them into an eating type mood.

One Reply to “Low Flows Continue”