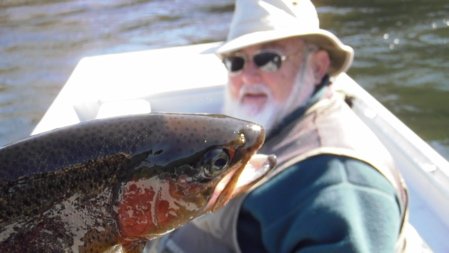 Occupy White River has been in full progress through the month of October with this guide hanging out with the 1% of the population who fly fish.  In fact for 23 days in October fishers from all over the country came to OWR in all levels of water and weather.  Catching has been mostly good with a few slow times in the late afternoons but we protested by not giving up and changing flies to entice those pesky fish take our flies.  1% ers’ don’t need signs but what we do carry are long rods mostly in the 9 to 11 foot range.  Weapons really! Used to to fool the fish by getting something that looks edible out into the river and on the bottom where the fish hang out.  OWR continues into November with no molotov cocktails thrown, no trash left on the banks of the river and in fact no fish killed or taken out of the river but gently placed back into the river for others to catch the next day.  I must admit however that we were guilty a couple of times of picking up the trash of a 99% er or two who carelessly allowed trash such as worm boxes or power bait jars into the river.  And my many thanks to the 1% who came to the White River and allowed me to transfer $$$$$ into my bank account on Nov 5 2011 also known as Guy Fawkes day in in the UK.  This will allow me to send in my quarterly  donation (aka) known as taxes to DC so we can put some more fish in the river, build roads to the river and fund the 47% who don’t fish at all but want free fish to eat because we catch more than our fair share.  After all it’s only fair isn’t it?  😉

Last Sunday the water had been off overnight and Rick (seen above) and I got the opportunity to stay in front of the water and fish his favorite spots.  We put in at Gastons and headed for the mail box at bruce creek shoals.  The water was coming at us but we did notice a few changes in the river.  Partee shoals does not appear to to be navigable any more other than getting down the shoal as the top of the channel has been filled in with gravel.  Bruce creek shoals looks as though it is still good and navigable but a bit narrower than before with the gravel above the shoal looking a lot different than before.  Stetson hole is narrower with lots of gravel being deposited on the right bank making this hole a bit narrower.  Three Chutes looks pretty good as does blue Hole but No Name Shoals between Blue Hole and White Holes is much narrower and shallower than before.  White hole is also skinnier due to gravel deposits on the right side of that hole as well  The shoal at Sportsmans is way different than before.  It is navigable again and the gravel in the center of the river is pretty much gone.  The main shoal on the left of the river has been pushed further down stream by 40 yards or so.  The front side of the Narrows hasn’t changed as much but the back side at the top and bottom have.  The top is abut half the width it was with much less water flowing through it than before but moving a boat on the front side of the island is much easier with more water flowing on that side.  Tucker shoal hasn’t changed much as no gravel was deposited in this area but has built up above the Wildcat Shoals access with the river narrower on the left side.  The ramp at Wild Cat has been cleaned up by Game and Fish with gravel taken out to allow for boats to use the ramp again.  The top of the shoal at wildcat on the left side has filled in and changed the course a boat must take.  Further into the shoals it also appears that less water is flowing on the right side and more water flowing over piled up gravel on the left side.  It would take much more time than I had to explore wildcat than I had but it’s gonna be tough getting past the area just below suicide rocks on the right side of the river as the channel has been filled in with gravel. The bottom of rainbow hole is also much more shallower with gravel deposits there.  The shoal is narrower as well. The drop off at tool creek is pretty much the same.  At that point the water caught us and we ran back upstream to fish bigger water.