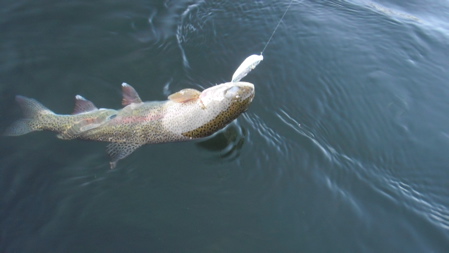 It does not seem to matter what kind of fishing it is be it Bass Fishing or Fly Fishing the surface action sure gets the adrenaline going and when the shad are coming through the dam and floating on the surface it’s a bunch of fun.  Since the regulation changes a few years ago that allow droppers the shad kill fishing has become even more fun.  Don’t know how long it will last as we do need generation and the lake level has dropped below the 654 foot level and the C.O.E. did shut off the water at noon today until 6:00 PM.  Either way I’ll take advantage of it as long as I can.

Hatchery funding is once again a political football.

Breaking News!! The Presidents 2013 Budget was released on February 13 and according to a USFWS Bureau Highlights document, the mitigation hatcheries, including Norfork National Fish Hatchery and Greer’s Ferry National Fish Hatchery were not included for funding. The following is an excerpt from page BH-61 of that document.

“Fisheries and Aquatic Resource Conservation – The budget request includes a total $131.6 million for the Fisheries and Aquatic Resource program, a decrease of $3.7 million from the 2012 level. ……………… These increases are offset by reductions in other program activities, including a $3.2 million program reduction to costs associated with the production of fish for the purpose of mitigating the effects of Federal water development projects. The FWS will continue to work to recover costs from responsible agencies in order to focus its base funding on native fish recovery and restoration.”

For the second consecutive year, the USFWS has eliminated funding from their proposed budget for the nine mitigation hatcheries which includes the Norfork NFH and Greer’s Ferry NFH in spite of the successful efforts by Congress to reinstate the funding into the 2012 Budget. These AR Hatcheries have an economic impact of $100 for every $1 of operating costs.

Attached are copies of letters to each of the congressional representatives from Arkansas urging them to see that this budget situation is corrected. Not only do we need the funding re-instated; we need to get the situation fixed so we don’t have to go through this process each and every year as we have done for so many years. Please feel free to alter the letters to suit your own thoughts. We do need to get our letter writing campaign underway as soon as possible.

Copies of these letters will be available at the upcoming Sowbug Roundup in Mountain Home. You can sign a letter there and it will be mailed for you. Impact is the goal and the more letters we send in, the greater that impact.