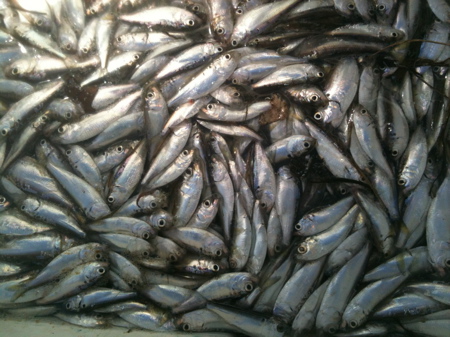 After a 4 inch rain early last week which has brought the lake up 8 feet the COE backed off and even shut down both dams due to flooding further down stream.  The Buffalo river was up at 20 feet and pushing out 30,000 CFS at one point and Crooked Creek was pumping out some major H2O as well.  As usual both dams held back the water to abate even more flooding that as we have seen in the past has caused some pretty major problems.  Well this last situation is what the dams are designed for and they worked pretty well in this instance. Myself and a few other guides were hoping that some more shad might just come through as Bull Shoals lake when the heavy generation began again as BS Lake has an overabundance of thread fin shad and today our wishes were granted.  Just a few minutes ago more shad began coming through the dam today on a full 8 units of water.  Good feeding for our trout to grow big on.  I like it.  Our last low water day was this past sunday.  This guide and a fisherman stayed in front of the water which began generation at noon.  We were able to wade fish the entire day by motoring and staying well in front of the water.  Can’t do that in a western style drift boat!

Our annual Sow Bug round up was this past weekend and I’ve yet to post some pictures which I’ll do next week.  It sure seems to take a week to get ready for the “bug” and just as much time or more to sort out everything afterwards.  It was a great show in a new (old) venue back at the county fair grounds which have been renovated with some new paneling and some air conditioning.  It also offers much more space for both the vendors, tiers and show goers which seemed to make everyone happy.