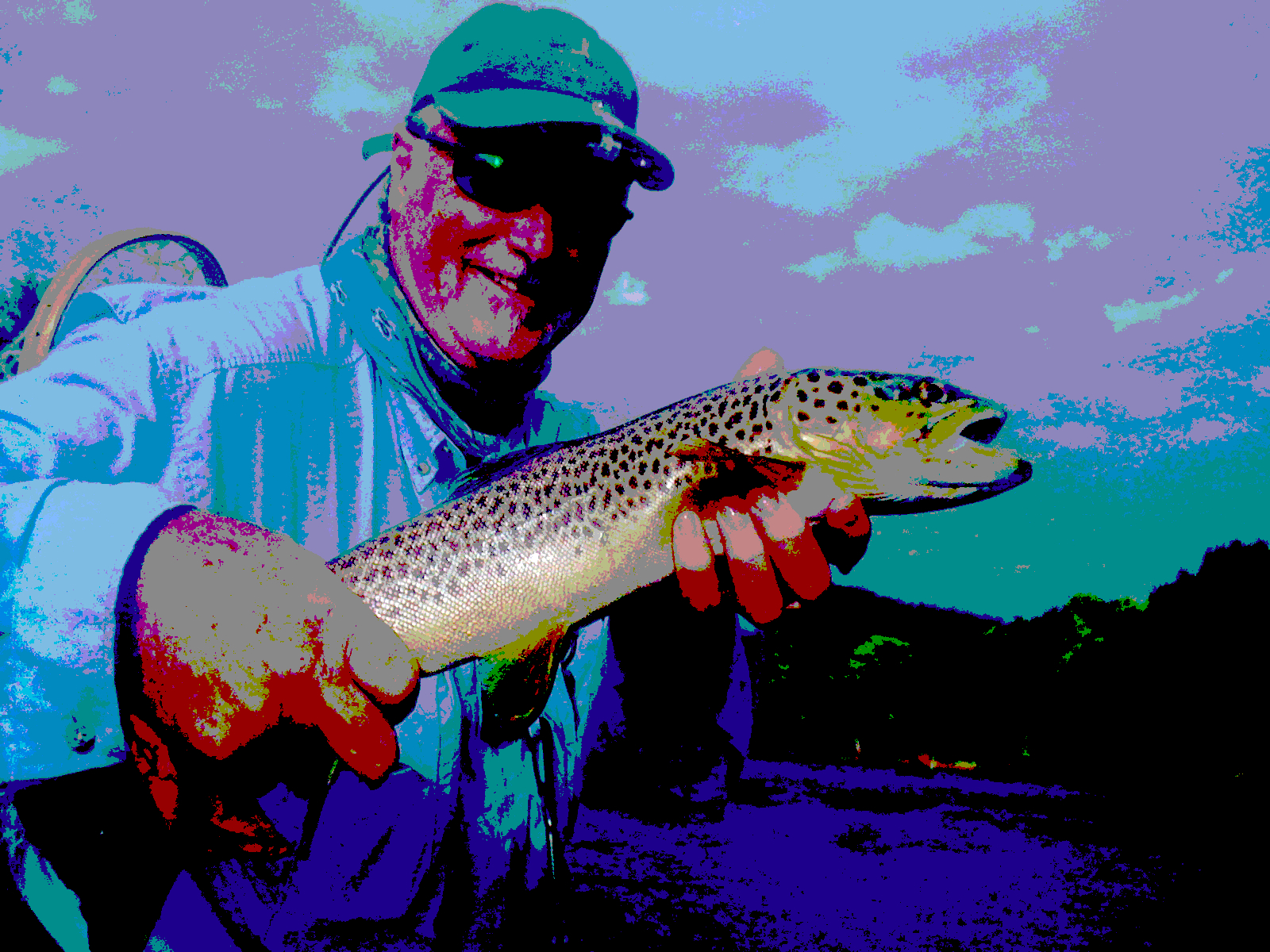 My fellow guide on the North Fork of the White Brian Wise has for years published his psychedelic photo Fridays and I would like to give credit for this stolen idea.  Brian has been into videos as of late and they are pretty good.  He spends a lot of time in the editing and I know it takes countless hours of learning to figure out how to use that ” stuff”.  A word like “stuff” is only proof of my digital ignorance but I did manage to find a free app for my Mac that does some pretty simple “stuff” that even I can understand.  This photo above is of friend and longtime guide Wayne Reed with a 23 inch brown trout.  So if you are reading this and are not as amused as we are then I can understand.  Never the less read on for some more pertinent information to the White River.

Sulphers continue to come off the white river on the upper end above Cotter and PT’s on weak or no generation water are still catching fish as are the dry versions in mostly size #16’s and on weak generation #14’s are also getting the job done.  Last week I figured this hatch was winding down but was wrong.  But that’s OK as I’ll take this hatch for as long as it happens.  Some hoppers are starting to work a bit and will begin to heat up in the next few weeks. Ants seem to be the ticket at the moment.   The last half of August and the First half of September are normally the best weeks for terrestrials but as last year proved it began early and we were still hooking fish on these flies in November! (go figure)  The White never fails to surprise me even after 17 years and roughly 2500 guide days on this river.  Yep!  That’s a good average isn’t it?  I think I’ve finally discovered what wisdom is after all these years but will write about that another day.

Generation this past week has been sporadic and mostly weak with less than a unit of water starting sometimes around 10 am or as late as 3:00 or 4:00 PM and lasting mostly till midnight which means fishing on the upper end after the water has dropped out has been pretty dang good and moving down stream in front of the water later in the afternoon is a good strategy to continue wade fishing on your own.  For me it means staying in front of the water for a bit and letting all the moss clear up on the first 2 or 3 miles below the dam and then motoring upstream and fishing out of the boat.  Much cooler that way and much more productive.

So load load up your fly boxes and stuff them in your vest and head to North Central Arkansas’s White River for some HOT SUMMER FUN.  Dress for a cool morning of temps in the 60’s and  warm afternoons (wet wading) and come and enjoy the fishing.  You won’t be disappointed as we should see plenty of both wadeable and floatable types of water.

Wishes & Fishes Fly Shop and Fly Fish Arkansas and the guides we work with encourage smart Catch & Release techniques to protect the resource for tomorrow and the future.  Call the fly shop at 870-445-3848 for your fly fishing needs or for information about the area or 870-404-8906 for guide services or information.