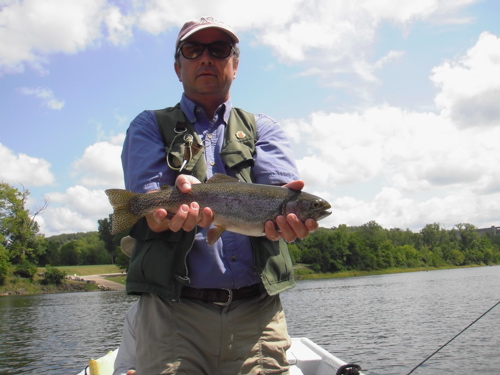 Looks like another hot summer like last year with temps hovering around the 100 degree mark.  But unlike last year we have not yet hit 115 and we don’t have 8 units of water around the clock which leaves open a window of wadeable water for those who don’t or do not want to fish out of a boat.  At least in some areas like the dam or at the state park for instance.  With this weak generation comes a bite that has been around for years and as far as I know was either discovered or invented by Hank Wilson who used to guide for Gastons Resort for many years.   “The Ant”  Hank began using the bi-visible and the bulbous bi-visible over 20 years ago with great success on weak generation water.  Often this type of fly will work as early as March and as late as November (back before the C&R area was shut down).

Marcus and Doug from Dallas came to fish last Friday (yep I’m late with a report about a week) and we dropped the boat in at the dam and had some pretty instant luck with the black foam ant that we’ve been tying at the shop.  Over the past week we have produced 11 dozen of these flies and have been having trouble keeping them in stock in black and cinnamon.  On Tuesday my buddy Mike D from Heber Springs came up to fish again and we did the best on this ant pattern.  Then again on Wednesday the ant worked like a charm again with explosive takes and fish grabbing and running with this fly.  It must me the rubber legs.  A fellow guide came into the shop a couple of weeks ago looking for hooks for his version of the ant and in our conversation he mentioned he also learned about the ant from Hank Wilson and for years it was a bit of a secret but like most flies, techniques and holes they don’t stay that way for long.

So if you are up at the dam either wading or fishing from a boat try a small ant and if you need the right one drop by the shop and pick up a few.  If you want to tie your own we have put together an ant kit with all the materials you need to tie up a dozen (sans) the thread and the Zap-a-Gap and the kit is only $5.50 (for a dozen) or if you like you can just get a dozen foam bodies for $3.00 in both colors.  We also have foam hopper bodies available in packages of a dozen as well for $3.00 a dozen and are available in a variety of colors including pink.  (don’t ask).

17 year veteran on the White River.

We use 5 independent very experienced full time guides on multiple boat fly fishing trips who have at least 10 actual years of full time guiding experience.  Book your group trips early to get the best guides.