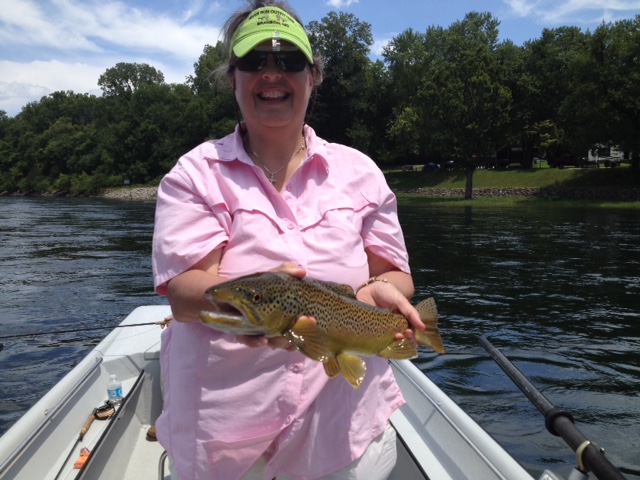 Hoppers were a lot of fun this past Friday morning with a couple and young son joining us again for a regular fishing outing.  Dawn & Albert were in my boat and James Albert in Guide Brad’s  boat flinging big streamers.  The hoppers produced 2 brown trout and several rainbows along with a couple of Cutties which we don’t really see very often on the White River Anymore.  As the water began to rise even more the hopper action slowed and we switched to nymph fishing and two consecutive drifts produced the best two brown trout of the day for Miss Dawn.

My readers have been listening to me say for a good month now that we will be seeing some BIG water and in a recent report I also said that I doubt the flood gates will not be opened this time around barring any major event such as rain or dam repairs to Tablerock dam.  This appears like it is going to be the case.  What a prime opportunity to sell some electricity at a better price with all the dams in the SWPA system primed and ready.  Big water is a great time to fish for the bigger brown trout either throwing streamers or deep water nymphing for them or fishing on the surface with terrestrials.

Don’t forget to drop by the shop and check out our clearance sale on Cortland items.  Rods & Reels, Fly Lines, Leaders and Tippets Galore, Rod Cases, Mono Filiment and braided line for both fly fishers and spin fishers alike.  You won’t be disappointed.  If you like send an e-mail and we will either mail you a list of why we have or send one through the USPS in an envelope.

Summer has arrived in the Ozarks, the lakes are up the dams are holding back the water and doing their jobs and big fish are on the move.

No wonder this area of the Ozarks is known as one of the top 10 places to cast a fly. Right now we have big water and big fish.

The Norfork tailwaters is still providing wadeable water and delivering some awesome fish. A short two hour quick trip for me this morning (my wife said make it snappy there yard work to do) landed me somewhere in the neighbor of 15 – 18 bows. Not all were giants but all were fighters including a bream that got put into the mix.

Most were caught above the island at Ackerman’s on #20 pheasant tail midges and #18 hare ears. A few fell for “F” flies and Yong Specials.

A great morning. Remember it is summer you should be hitting the water at first light if you can, that is when the most action seems to be taking place.

We are sadden to report the passing of Jim Gaston. Jim did so much to promote this area and the river he loved.

LIFE IS GOOD IN OZARKS ……. IT GETS BETTER WHEN YOU INVOLVE A CHILD.