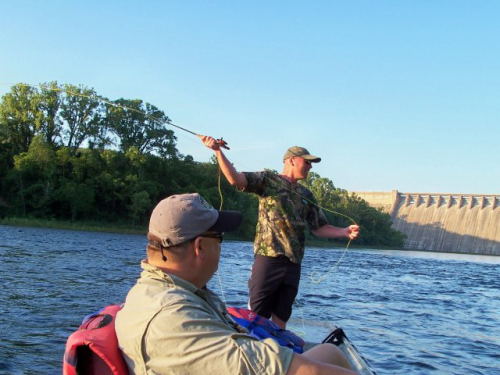 The pic above is of Paul Arden of Sexyloops.com and Jeff Fry Pres of the Freestate Fly Fishers of Lawrence Kansas.  Both Jeff and I were in awe of Pauls casting ability.

Getting a little snow in Bull Shoals this morning.  Looks like cold weather is hitting us again and it’s windy to boot with wind warnings out for the lakes.  This should cool down the lake a bit more.

The lake temp has already dropped from when I took it yesterday and is at 48 in the cove near the dam.  The middle of the lake is at 43 and 44 in some areas according to some bass and walley fisherman I’ve spoke with.  Starting thursday evening temps will begin to drop even more into the high teens with the lows predicted to be in the single digits by the weekend.  I’m hoping this is the cold front we need to drop the lake temps to the magic number of 42? and cause shad to come through the dam.

The rain gauge at Bull Shoals Dam shows 2.04 inches of rain for the month. This last rain was about an inch and the one we received last week was an inch.  The ground was saturated so most of the rain we received this week was run off.   The lake temps are varying from 43 f in the center of the lake to as high as 48 in lake arms and coves.   Eggs and Jan Juan worms continue to work well on both the norfork and white rivers in Arkansas. Streamers as well as sculpin patterns were working on Saturday according to a couple of fisherman who cam into the shop last evening.

Thanks to those who donated online for the Johnson benefit.  The lights and the cones on bull shoals dam have been removed so there are no delays at this time.

Don’t forget to sign up for the shad kill alert by sending an e-mail to shadkillalert@flyfisharkansas.com