Midges and Caddis are coming off the surface and Caddis are ovipositing in certain parts of the river such as Blue Hole and Bruce Creek Hole.  Midges at the dam are thick and heavy.  Various types of midges on a long leader under an indicator along with a sow bug, worm or caddis dropper are a good ticket to catching some numbers of fish.  Wind is is the wrench in the cog and maintaining a drift is the challenge in these conditions.  Water flows yesterday began with a couple of units and rose slowly for most of the day until about 3:00 pm when the level began to fall somewhat. This morning at 4:00 am CFS is at 13,300 and the lake level is at 661.90 and the lake level has continued to rise.  Dissolved Oxygen in the lake is at 14.00 ppm at the surface with the water temps at 51.4f.  The D.O. 85 feet and is at 9.5 ppm with the temp at 45.3  The D.O. remains fairly constant down to 170 feet and is at 9.0 at that level with the temp at 41.2  The surface temps have been warming up quickly and bass fisherman are reporting extremely good fishing with bass and small mouth.

The prediction for today is 198 MW or 13,900 CFS or 4 1/2 units.  The lower flows lasted only two days as the levels further down stream at Newport have fallen.  More rain is predicted for this evening and into tomorrow so who knows what could happen with the flows at this point.

A lake wind advisory for today from 9:00 am till 7:00 pm but it will be sunny, breezy with highs in the upper 70’s and winds from 15 to 29 mph with gust to around 30 mph and a 50 % chance of showers and thunderstorms after midnight.  Wednesday brings another chance of showers and thunderstorms with a 40% chance and highs of 70 and winds of 10 to 15 mph.  April is one of the windy months in the Ozarks with November being the other.

Welcome to Fly Fish Arkansas. The leading fly fishing guide service on the White & Norfork rivers. Fish with the best! Forget the rest.  Providing  safe, educational and enjoyable fishing adventures since 1995.  Take your next fishing trip to the White River and fish with Jim at Fly Fish Arkansas. Call 870-404-8906 or send an e-mail to jim@flyfisharkansas.com

This from todays Baxter Bulletin:

YELLVILLE — The discovery of a rare specimen of cave-dwelling crayfish in Town Branch Creek here was the subject of a request by the U.S. Fish and Wildlife Service for the Yellville City Council to develop and adopt a set of land management practices to protect the species and the groundwater that supports it.

“It was a crayfish that brought me to the table, but protecting it will be good for all of us,” said David Kampwerth, a biologist with the Arkansas field office of the U.S. Fish and Wildlife Service at Conway.

Kampwerth said a Yellville youth about two years ago pulled two specimens of a critter that turned out to be the cambarus zophonastes, or Hell Creek Cave Crayfish, according to genetic analysis and comparisons. Before the find, FWS biologists knew of just one other place in the world where the crayfish lived — the waters of a cave in Stone County now privately held by the Arkansas Natural Heritage Commission.

“We thought this guy was endemic to that site only,” said Kampwerth. “For him to turn up over there, 57 miles away, was absolutely astonishing to us.”

The biologist said the discovery of the species is a testament to the relatively good water quality that permeates the karst land formations underneath the Ozarks between Mountain View and Yellville. He hopes that fact is enough to persuade the council and land developers to take a few precautions to assure projects don’t contaminate the subterranean waters.

Kampwerth characterized the Yellville area as a “recharge zone,” or an area were streams called “losing streams” flow intermittently above and below the earth’s surface because of fissures in limestone formations.

The FWS’s management practices will ask land owners, developers and government entities to identify caves, springs, sinkholes and losing streams and to create buffers or setbacks to eliminate the potential for development that would impair the quality or volume of waters as they flow in and out of the karst. All four land formations are the most natural conduits to underground waterways and the most likely pollution points.

The FWS recently requested and anticipates grant funding to complete a dye trace study to determine the direction and scope of aquifer flows, Kampwerth said.

City Attorney Sam Pasthing named two recent commercial developments — Dollar General and Freds discount stores — and their locations for “hypothetical” commentary from Kampwerth. The biologist said he would have advised against the location of both projects because both are located in a flood plains. But neither represent a threat to groundwater quality or the crayfish, he said.

Yellville Mayor Shawn Lane noted the city has a couple of years to develop and adopt FWS best practices for karst land management. He said the city’s Planning and Zoning Commission chairman, Daniel Dozier, will work with Kampwerth to harmonize current planning and zoning guidelines with those suggested by FWS. He said he expects that work to be completed parallel with the FWS dye tracking survey that is expected to take about two years. Both Kampwerth and Lane said the new guidelines can be developed and introduced in a way that does not impede economic development in the area.

The biologist also asked the council to consider creating a storm-water drainage system minimum standards to protect Town Branch. He said storm water diversion away from the creek is most important for the first inches of rainfall during any rain event. He noted state regulatory agencies require storm drainage system for constructionphases of commercial projects, but the FWS will require developments to include post storm drainage systems to be capable of retaining runoff from the first inch of rainfall of any rain event.

Kampwerth said runoff from the first inch of rain carries the heaviest concentration of groundwater contaminants including oil from chip-and-seal road surfaces, and oil and any other substances that have fallen onto parking lots. Residual herbicides and pesticides also wash from vegetable matter during that first inch of rainfall, he said.

Kampwerth also asked the council to consider developing an inventory of septic tanks in the city that range from 20 to 50 years old. He said funding would be available in some instance to assist with emptying and maintaining the tanks. 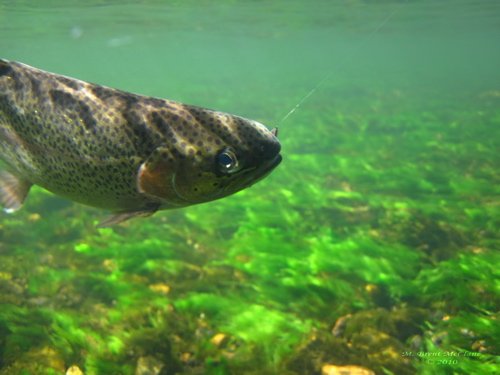