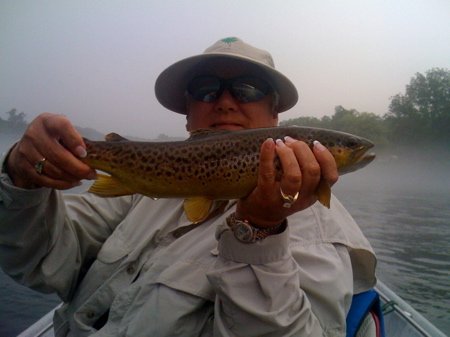 Redington Pursuit complete outfit $179.95 with Free Shipping and a Free Water Proof Fly Box.  Click on the Fly Shop Page for all the details.

Hank and Shirley are avid RV’ers and fishers who spend two months a year in the Ozarks in May and again in October and fish both the lake as well as the river.  This past Monday we fished the river until another storm hit us.  The fishing was fabulous and the catching wasn’t bad either.  Hank and Shirley only began fishing a few years ago and I have watched the skill level of these fishers improve greatly.  Shirley was having a bit of a tough time with her 9 foot Winston because of the leader length so I put a Greys 11 foot streamflex in her hands.  I think she fell in love with that rod as the casting and playing of fish became much easier.  Oh! what a rod! Sure makes it easy to lift it up into the net! 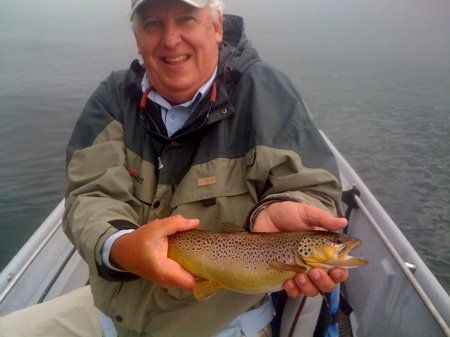 Here is Hank with his brown trout.  We were getting some pretty good bows on this day as well but I have to admit that most of the takes were pretty light and subtle with the fish swimming right at the boat which made them hard to keep on so stripping really fast to keep up was a bit of a challenge but Hank and Shirley were up to it.  This couple is going to be spending next summer driving up to Alaska on the Alcan Highway and then spending some time at Denali park and on the Kenai Peninsula.  That sounds like fun.

This molting Cicada was hanging out on the irrigation pump by the golf course at the boat ramp.  I have seen pics of this on Cicada websites and to be honest I don’t know if it is still molting or if this is it’s natural color but the sound around here is growing daily and is getting pretty loud on some parts of the river. It won’t be long before the life cycle of this creature ends and the fun for the fly fisher begins.  See the Fly Shop page for more info on flies.

In this mornings local newspaper the Baxter Bulletin there is an article about these little creatures with some info but, if you are a regular reader of this blog you already know about this event and more.  See how smart you get when you hang out with Jimmy T.

From the Baxter Bulletin:

It’s the sound of 13-year cicadas, and they’re back in the Twin Lakes Area.

Throughout the South, cicadas are emerging from the ground and causing quite a racket.

The group of cicadas currently emerging — Brood XIX — last emerged in 1998 and are the most geographically widespread, said Dr. Jeffrey K. Barnes, curator of the University of Arkansas Arthropod Museum in Fayetteville. As temperatures begin to warm, the cicadas will be found across the southwestern United States, with the exception of Florida, he said.

These cicadas differ from the annual “dog-day” cicadas, which are black and green. Periodical cicadas are larger and have black bodies with neon red or orange eyes, Barnes said. They also have bright orange wing veins.

In the Twin Lakes Area, some residents reported first hearing the whirring sound of the 13-year cicadas about two weeks ago.

The cicada nymphs grow underground, primarily in forested areas. The cicadas emerge when the soil’s temperature reaches 64 to 65 degrees and transform into adults, Barnes said. The males begin to sing to attract the females, and the sound can rise to a deafening crescendo.

“Some people say it sounds like a chain saw,” Barnes said.

After the insects mate, females cut open tender tree twigs and lay their eggs. The nymphs will fall and burrow into the ground, feeding and growing for 13 years. Adults typically live about four weeks, Barnes said.

The cicadas could damage newly-planted trees or shrubs because the female lays her eggs on the ends of branches, according to the Magicicada Mapping Project, sponsored by the National Geographic Society. The best way to prevent possible damage is to cover the newly planted tree or shrub with netting, according to the project’s website.

Periodical cicadas are not poisonous and are eaten by many predators, including birds, snakes and turtles, Barnes said.

Another brood of periodical cicadas, called Brood XXIII, emerged in 2002, and will emerge again in 2015, he said.

For more information on periodical cicadas, visit the University of Arkansas Arthropod Museum’s website at www.uark.edu/ua/arthmuse/percicada.html or the Magicicada Mapping Project website at www. magicicada.org.”

The magicicada web site is where I got a lot of my information as well as from an avid cicada watcher by the name of Nick who has been coming to our area attempting to video the emergence of these little creatures which by the way are available at the shop in 5 versions.

More fishing:  This past Tuesday afternoon I had some friends in town that I went to high school with and we hit the river in the afternoon with the flood gates open and did really well drifting right down the middle of the river.  We caught some really nice “bows” or as John Berry a local guide would say they were “fat and sassy”.  Yep we were fishing roughly 15 units of water or almost double our regular high water of 8 units.  It was a blast!  Things got a bit rough at 3:00 when more water was released with big wads of moss coming down the river.

Guides who were not working were on the river looking for walleye, drum and other fish and two guides netted up this half dead fish.  It’s just way too much fun living around here as the adventure never ends.

All photos copyright 2011 and may not be used without permission on any internet sites including Facebook, Twitter or other websites with out express written permission.