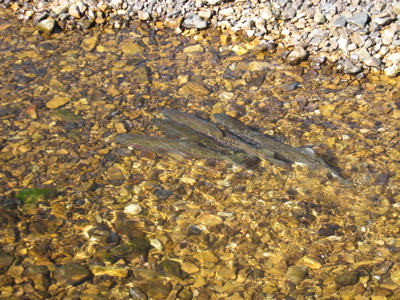 Provisions to fund mitigation-of-species fish hatcheries have been restored to the U.S. Fish and Wildlife Service’s 2012 Budget proposal, according to Leon Alexander, president of the Friends of Norfork U.S. Fish Hatchery.

Alexander said a subcommittee of the U.S. House of Representatives Appropriations Committee — the House Subcommittee on Appropriations for Interior, Environment and Related Agencies — marked up the budget to restore about $3.39 million that had been cut from the budget by fish and wildlife directors earlier this year.

The key language in the mark-up appears on page 25 of the subcommittee’s 193-page report to the greater committee. The following is the excerpt from the mark-up session that holds some hope that adequate funding for mitigation-of-species like the one at Norfork will be adequate in 2012:
This statement is on page 25 of the subcommittee report “Department of the Interior, Environment, and Related Agencies Appropriation Bill, 2012” which can be found at: http://appropriations.house.gov/UploadedFiles/FY_2012_INTERIOR_FULL_COMMITTEE_REPORT.pdf.  If you peruse the document you will see that almost all programs – not only in the Fish and Wildlife Service but in all agencies are undergoing massive budget reductions for FY 2012.  Because of the push to reduce Federal Government spending these types of budget reductions will continue in FY 2013 and beyond.

The Chairman of the House Subcommittee on Appropriations – Hal Rogers, (R) Kentucky released the following statement:

“Over the past five months, I have worked hard to stop President Obama’s proposed funding cuts to federal fish hatcheries and find the required savings in agencies that simply want to overburden businesses with costly regulations – regulations we don’t need and working families can’t afford.  To the Commonwealth and many other states, fish hatcheries spur small businesses and create jobs in the fishing, wildlife, and outdoor recreation industry, as well as providing meaningful educational and drug-free opportunities for our young people.”

The House Subcommittee’s marked-up budget bill goes to the full House Appropriations Committee for review and approval.  If the full committee does not make any changes and signs off on the subcommittee’s proposal – then the House of Representatives has fully restored the Fisheries mitigation money back into the Fish and Wildlife Service’s FY 2012 budget.

If the Senate – during its Subcommittee and Committee Appropriation meeting’s on the Service’s budget — arrive at the same conclusion as the House – to restore the Fisheries mitigation money back into the Service’s FY 2012 budget – then the hatcheries would be fully budgeted and remain open in FY 2012.  However, if the Senate does not agree with the House’s recommendations then the mitigation hatchery budget issue would not be resolved until the Senate and House Committee’s go into conference and jointly discuss the issue.  The conclusion of that conference meeting would be announced when the FY 2012 budget is signed by the President.

Restoring the mitigation money into the Service’s FY 2012 is great but it is just the first battle in what might be – in my opinion – a broader war.  It appears that the Directorate’s proposal to close the mitigation hatcheries might not be so much of a budget issue but more of a personal agenda issue.  If it was just a budget issue the Directorate would NOT have needed to fabricate lie after lie after lie about the hatcheries and then actively promote the wrong amount of money needed to be reimbursed by the COE and TVA..

It is my opinion that if the hatcheries remain open in FY 2012 – the Directorate will again put them on a list of budget decreases for FY 2013.  We need to try to keep the hatcheries open until a reimbursable of $7+ million from the COE and $1.1+ million from the TVA is finalized.  To accomplish this objective Congress would need to incorporate the following type of language into the final appropriations bill signed by the President:

Direct the Service to follow the guidance of the Sportfishing and Boating Partnership report that stated “Legislation is necessary to clarify various existing legislative mandates and FWS policies regarding mitigation.  However, until this legislation is enacted the FWS must continue to fund the current mitigation responsibilities of the NFHS.”

A Congressional bill writer can reduce the above ideas into a couple of sentences in an Appropriations bill.

Looks like the pattern of generation is changing as the shut down during the night has come to an end for the nest three days starting today.  The lake will begin to fall a lot faster as well as table rock is near normal pool elevation as is beaver.  Does not look as though there is any major rain in the forecast either.  Big water flows should continue and ramp up during the day with fishing from a boat being the most productive with our new GFW fly and flesh flies.  Terrestrial action is picking up on lower flows and in heavier winds pushing hoppers into the river in eddy water.  I sure was looking forward to riding some more rises but as the lake levels begin to drop perhaps we will see some more of this type of generation.

Book your September fishing adventure soon by calling the number below or by calling 870-404-8906.  I’ll answer your questions via e-mail as well at jim@flyfisharkansas.com