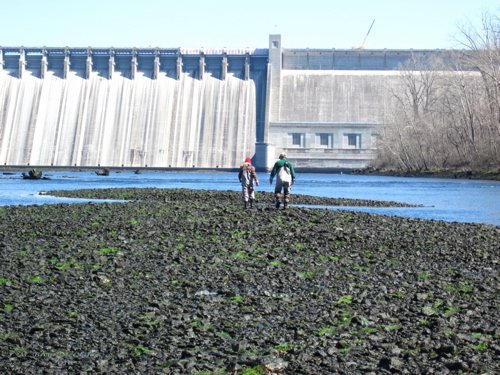 A pretty rare sight the past few years is seeing the bottom of the river and even more so is actually being able to spot fish and cast to them.  We got to do this this past monday morning when the Dam shut down at 8:00 am in the morning.  Of course the C.O.E. only allowed us a short window of time to have this fun as the horn sounded and the water began to flow once more.  That night however generation ceased again until 8:00 am the next morning allowing another short window of wadeable water further down stream.

On Monday a comedy of errors occurred in that there were many “stranded” boats and some very confused “new” guides that had never seen “low” water before and a bit of “panic” set in.  Some equipment was prematurely “aged” and some tempers flared somewhat due to a lack of knowledge.

The White River is only living up to it’s name of being unpredictable and if you have spent any time on this river you already know that. It pays to hire a truly seasoned guide who knows the river and has the ability to keep track of and read what the water is doing in real time.

A much cooler week this week with a cold front passing through and dropping some rain on us Tuesday morning. (folks from Texas were loving it.)  The brown trout are on the move daily and podding up for the annual spawn.  A bit of a tough period occurred during the full moon phase as it usually does but we are now on the other side of that and the fishing is picking back up.  Today fishing down stream from the Narrows down was productive on pheasant tail numphs. We did git into a small BWO hatch as well as a caddis hatch.  Not much surface action though.  The water temp of the river is a little higher than it should be for this time of year but then we went through this in the 2008 season as well.

November is shaping up and we will more than likely begin seeing some no generation water more often as the days go by.