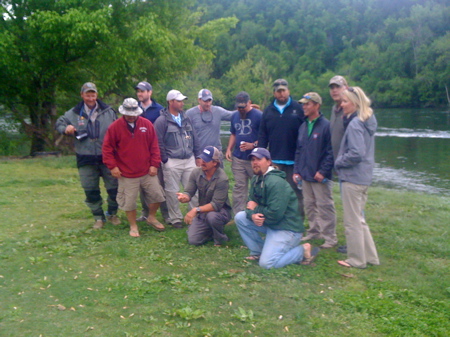 It has been my pleasure for the past two days to be involved with a program to help out wounded combat veterans.  The program is called Rivers of Recovery and more information can be found at http://riversofrecovery.org  Our adventure began Friday morning meeting the folks involved and getting acquainted and then we were off to the river.  We headed upstream and found our first fish at three chutes on top of the shallow gravel bar there in the middle of the river and worked it over pretty good getting several strikes and landing a couple.  Matt my other fisherman in the boat had never had a fly rod in his hand and got a strike pretty quickly but it got off. Matt soon caught on and got one into the net.  We worked over shallow grassy areas and more gravel throughout the day and called it a successful fishing adventure for the day.  The next day the wind was more fisher friendly and we managed to land several brown trout for the day which eluded us the first day.

Here is Brian with his biggest of the two days.

Matt was on fire the second day hooking and landing several brown trout.  We’ll be back at it again with another group on Tuesday. 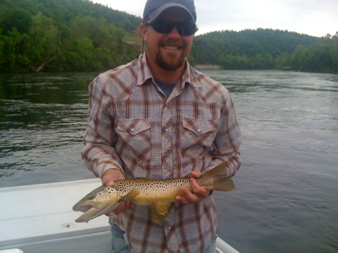 See y’all on the river.