Sometimes rare days occur and all the stars the sun and the moon line up to form a just about perfect day for fishing.  The past two weeks have given us some low water wadeable conditions with no wind and gin clear water which sure has made it easy to see fish. 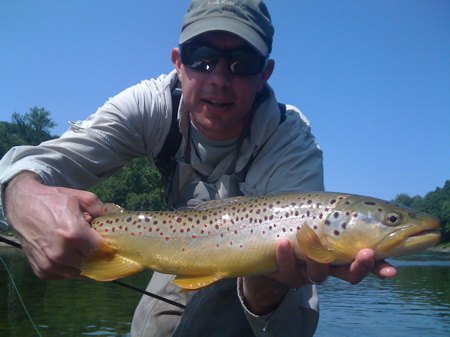 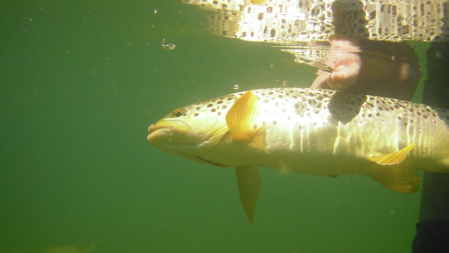 It also helps when fish are stacked up like cord wood which was the case this past week and as the days went by more and more fish began to stack up waiting to take their turn moving upstream to find cooler water which is usually the case as summer approaches only this year it’s happening a bit sooner due to the warmer weather this year. But hey!  That’s OK with my fishers this past week as they were the ones to benefit from this bonanza.  Monday began with Mike from Heber springs as we took a look in one of my favorite places to fish on the White and we were quite pleased when we found lots of brown trout congregated in a one mile stretch of the river.  Sometimes it takes a day to figure out the fish and we did manage to hook and land one 22 inch brown trout for the day with a fish count well over 100 for the day.  The following two days was like taking candy from a baby with fisherman hooking and landing in excess of 20 brown trout each day.  Jake seen above had one day with 10 fish over the 20 inch mark and another 10 fish between 18 and 20″  Both fishers for the two days each had spectacular days.  After three years of high flows we are starting to see much lower flows now.  However due to warmer weather and warmer water conditions we also began seeing some “FISH WATER” which is water released from the dams to cool the river down further down stream.  Still there should be enough wadeable water this summer to satisfy the fishing desires of those addicted to the White River and her growing population of big brown trout.  Sulphers are starting to come off as they have been from time to time for the past two weeks.  Jakes fish run of 10 over 20″ pretty much all came in one hour on a Pheasant Tail nymph size #14 and an olive scud #14  At the start and end of the day a black Zebra midge #18 was doing the trick for both fisherman with the occasional fish being hooked on a planaria #20 in tan as well as a dark olive sow bug #14.  Leaders 12 feet long with the indicator placed 6 to 8 feet above the fly and a split shot a foot above the fly pretty much did the trick until we began fishing the gravel flats with the midge in which case our depth decreased to about 4 1/2 feet using the midge.

The sulphers should start peaking as we get a bit closer to June so some dry flies in low water should begin to pick up if generation does not pick up too much.  We have already began to see hoppers and we are anticipating a good year for hoppers.  Rain this year so far has cooperated and this is turning out to be a “normal” year unlike the last three we have seen that have given us record flows and record rains and flooding.  It’s nice to be back to normal.  Check out the wall of fame as well as the fly shop page.  Our web shop at http://theflyfishing-store.com and http://hogskincreek.com our new line of anglers essentials which will be growing over the next couple of year.

June and July are great months to fish the White River and fall will be here sooner than you think so run to your phone and book your fishing adventure today.  870-404-8906