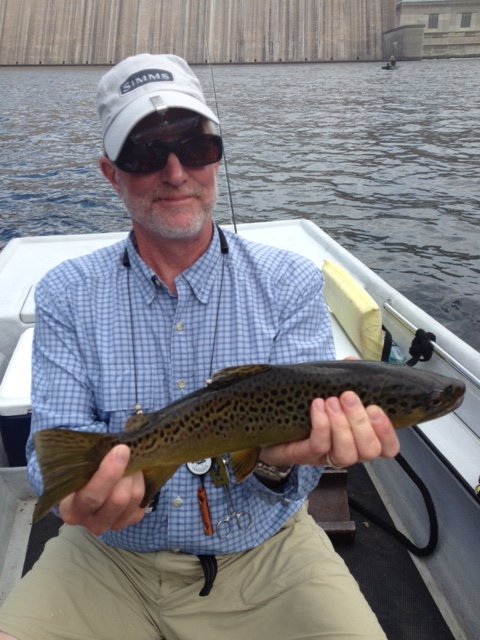 Several storms in may and early June have brought the lake level of Bull Shoals Lake up to 663.63 and the Norfork lake up to 560.14  Bull Shoals is almost 10 feet above the normal pool elevation of 654.00 above mean sea level (MSL).  For the past couple of weeks generation has been weaker in the mornings with generation of one to three units and amping up to 6 units in the afternoons.  When this was happening the fish really turned on on the upper end.  The weak generation was not making the fish happy but a few could be caught.  The past few days have seen the dam off until later in the day.  Flooding down stream is more than likely the cause as the Buffalo River was at 10 feet and Crooked Creek was also at 10 feet which is a lot of water for these rivers. 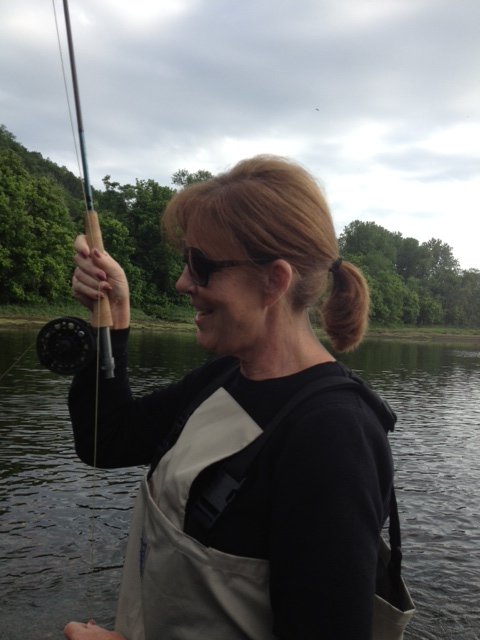 Last week I had three fisherman from Texas who had never fly fished on low water wading at the State Park.  Jackie seen above had a fish on in the first 5 minutes of the morning on a PT soft hackle soon followed by her two friends.  The water was supposed to be off for another hour but the powers that be decided otherwise.  We re-rigged for higher water using soft hackles and a red midge dropper.  Later in the day shad patterns fished right off the bottom Produced some pretty good fish with 2 and 3 fish per drift as long as the water was rising and slowing down as it was dropping.  This has generally been the case with the White River that we call the Yo-Yo effect.  To counter this I’ve been rigging two rods per person.  One for rising water and one for dropping water.  A soft hackle and midge for the dropping water set much shallower with suspended flies so as not to catch the bottom and two rods with the depth set much deeper with a shad or white fly and a sow bug dropper or even two different colors of sow bugs or scuds.

I won’t hazard a guess as to how long we will see wadeable water on the White in the mornings but more rain is forecast for later in the week and I imagine we will see both lakes continue to rise.  At some point this summer we will begin seeing some much heavier generation.  This could be pretty good for the fishing as well as the fish.  I am looking forward to the heavier generation.  Apparently two of the Bull Shoals Dam units are down for maintenance.  I don’t know how long this will last.

SHOP NEWS:  Our web store http://theflyfishing-store.com has a new look and is much easier to use and navigate.  We will be adding some new products over the next couple of weeks as well.  Take a look and your input is appreciated.