The fishing and catching on the White River is pretty good at the moment.  The hopper action is hit and miss but some good fish are still coming off these flies.   Trying different terrestrials through out the day and especially when the sun comes up seems to be the trick.  The takes are three ways it seems.  An explosive take which at the moment is the best take, the swim up to it slowly and gingerly mouth the fly and the dolphin take.  The dolphin take is when the fish does like the dolphin and rolls onto the fly and takes it from the top.  The best hook set is to wait for the fish to take in under a foot or two and then set the hook.  The gingerly mouthing take is the hardest one to deal with as one must let the fish grab the fly and then let it turn or dive and then set the hook.  It’s difficult to wait long enough and let the fish do it’s thing and turn at an angle that will set the hook.  The explosive take is more of an instant hook set and the fight is on.  Dropping a blood midge below the hopper is productive.  Day in and day out this midge produces numbers of fish and catches the occasional brown trout. 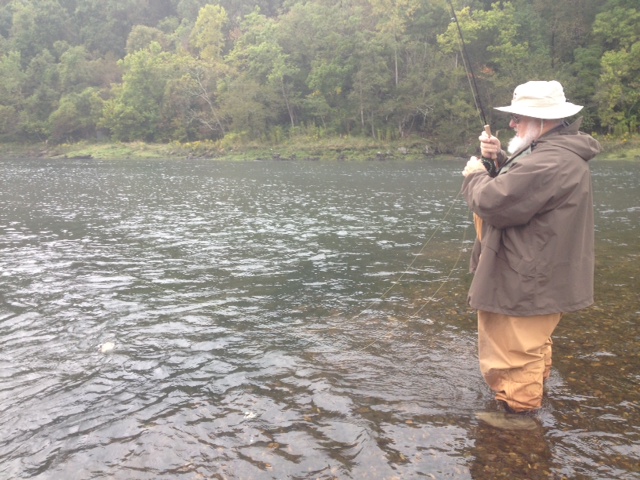 Flows on the White River are down to something along the lines of the minimum flow but we’re not quite sure exactly what those flows are as yet as we’ve been seeing 1500 to 2200 CFS.  Time will tell I guess.  The late afternoons are seeing a few hour power demand releases of 3 and 4 units.

It finally happened, they turned the water off at Norfork Dam on Sept 10 after running water for three weeks or more. Boy were the trout glad to see us waders. Some of them wanted to play so bad they kept jumping up in the air saying catch me next.

Because it was a Tuesday, not too many anglers on the water which was good. But those of us who were was having a field day. I did not speak to anyone who did not catch at least 16 fish that morning. They turned the dam off at 1100 so morning is all we had.

I started off with sowbugs and did nothing, then switched to a pheasant tail midge # 18 and never looked back. The fish were attacking it like they hadn’t eaten in a week. speaking to 4 other anglers in the section I was fishing all had discovered the same fly (pheasant tail midge) as being the hot one except one man who was fishing a two fly, pheasant tail and a rainbow warrior and said both were producing the same.

Day 2, Wednesday is going to be as pretty as yesterday and again water off till 12:00. Not as much activity on the pheasant tail midge as was Tuesday, after an hour I switched to the rainbow warrior and it was like someone left the barn door open and all the horses came rushing out to go feed. The rainbow warrior is becoming more and more the fly I have come to depend on especially in riffles. A streamer version called the Norfork warrior is also getting raved reviews from those who use it and again in faster water.

Several anglers are carrying egg patterns and hoppers with them but none have said they are using them because the midging activity is so profound. Woolly Buggers are doing well in black but don’t seem to be producing near as good as midges. Midges are by far the big producer at the moment. Be sure and carry a good selection of midges such as Zebra (copper/black, silver/black) rainbow warrior, pheasant tail and brassie in various sizes #18 – #24 should cover most situations.

Thursday minimum flow started on the Norfork Tailwaters. It is said to be 300 cfs. FYI, the minimum flow is being discharged through a pipe on the outside of the dam therefore by passing the generators and the computer. If you go to the web site that gives the generation you most likely could be given false information as I understand it.

As on the Bull Shoals Tailwaters, your going to notice a slight rise in water on the Norfork Tailwaters as well as a noticeable amount of an increase of water pressure. Be careful in wading, you might not want to wade as deep as in the past and by all means wear a wading belt and carry a wading staff for safety sake.

I did notice a few fish changed their home address and did not leave a forwarding address. This is what makes trout fishing so much fun, searching to see where they might have gone and getting to explore new waters. I did notice what I thought to be larger trout than normal. As a matter of fact I released one over 20″ and another over 18″ all caught on enhanced pheasant tail midges #18. The remaining trout were in the 14″- 16″ bracket and all fought hard, or that is what it seems in the faster water. Was very very pleased with the quality of the fish.

The flies that seemed to be the big hitters were, pheasant tail midges, rainbow warriors, woolly buggers and bead headed hares ear soft hackle. Plan on going a little deeper and a little heavier with the flies you use, your going to need it in the faster water.

Life is good in the Ozarks

On another note the road to the golf course ramp is now in the process of being paved.  Don’t know when they will be finished as yet.

This below about the hatchery situation.  From the Baxter Bulletin today Sept 19 2013

As the U.S. Congress and President Barack Obama bantered over the federal debt ceiling and a possible government shutdown, the U.S. Fish & Wildlife Service said Wednesday it is working on a plan to avert “imminent closure” of the Norfork and Greers Ferry national fish hatcheries and other FWS hatcheries threatened by annual funding shortfalls.

“The U.S. Fish and Wildlife Service is nearing the end of a detailed and lengthy review of its hatchery system’s fiscal condition. We are working on efforts to redirect funding to prevent imminent closures and we will be sharing the results of the review in order to work with our stakeholders on a long-term solution.”

On Tuesday, U.S. Rep. Rick Crawford (R-Jonesboro, Dist. 1), claimed “victory” in a press release for spoken assurances he received from FWS that “imminent closures” are not in store for FWS-operated hatcheries in Arkansas — the Norfork National Fish Hatchery and the Greers Ferry National Fish Hatchery.

Crawford’s statement came with an attached letter dated Sept. 11 to Sally Jewell, secretary of the U.S. Dept. of the Interior. The letter is signed by Crawford and Arkansas’ U.S. Sens. Mark Pryor and John Boozman, Arkansas’ U.S. Reps. Tom Cotton, Tim Griffin and Steve Womack, and three lawmakers from outside the state. The delegation seeks a 60-day review of the anticipated FWS hatcheries management plan before FWS initiates any hatchery-related reorganization that may rise from the plan.

“This is great news for Arkansas, and I am proud to have been a leader to save funding for our mitigation hatcheries,” Crawford said.

Others in the delegation who signed the letter have not publicly claimed victory in the hatchery funding crisis.

More prevalent news from Washington on Wednesday was an announcement from GOP House leaders that they will move quickly to raise the government’s borrowing cap simultaneously with a list of GOP priorities to block “Obamacare,” force construction of the Keystone XL pipeline and set the stage for reforming the loophole-cluttered tax code, according to Associated Press reports.

Obama promised again Wednesday to not negotiate over the need to raise the nation’s borrowing limit, which the government is expected to hit as early as next month.

Crawford also announced he introduced Tuesday the Aquaculture Risk Reduction Act, which provides an exemption for producers in cases of accidental inclusion of undocumented animals in shipments of fish across state lines.

One Reply to “Hatchery~Catching~Flows~Paving~Henrys’ Wading Report”