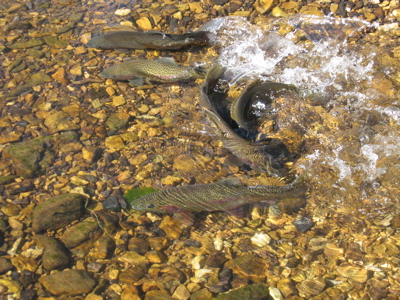 December through January Tuesday through Saturday 8-4 Closed Sunday and Monday.  The web store will be back open the 2nd or 3rd.

Well, wonders never cease ! Bull Shoals dam was closed down to minimum flow over the Thanksgiving holidays. Went to the area known as the Narrows expecting to find a crowd and three people could be seen up river. For two day’s Bill and I pretty much had the Narrows to ourselves.

One thing became evident from the very beginning that is, if your going to fish fast water be prepared to get your fly down. Having said that let me say there is plenty moderate and slow water to fish and the fish are there also.

It would be difficult to pick out only one fly that stood head and shoulders above the rest. Egg patterns, Zebra, and Pheasant Tail (with a hot orange spot around the thorax) were very productive, Bill did well also on Rainbow Warriors in the faster water. You need to think small say #24, #22 and #20 were stood out in the midge category.

Sowbugs were thick, step out of the water and sowbugs would be covering the top of your boots, again keep them small around # 18 should do it and tan seemed to be color.

Over in Cotter Woolly Buggers in black # 12 and #14 have been doing very well at Roundhouse shoals. Try the back side of the island. If you haven’t been there lately, minimum flow has changed it some.

My favorite sowbug is the RS sowbug, a very easy fly to tie and one that produces at Dry Run Creek and the Norfork Tailwaters like no other I have seen or used.

Two of my largest fish have been caught on this fly, one was on the Norfork the other at Rim Shoals on the White both exceeded 27 inches.

Please be careful when wading as the Browns are laying eggs in the redds and we don’t to step on our future.

Life is good in the Ozarks hope to see y’all soon.