Tungsten Beads are back in stock.  see http://theflyfishing-store.com for stock levels and of course a 100 packs still start at only $12.00 Free Shipping till the end of the month as well.

As of now the C.O.E. is holding back water due to flooding further down stream which means that the dam is doing it’s job of flood control.  The lake is still rising of course and more rain is forecast for the next few days.  Our ground is saturated so any more rain that we do get will run off into the lake and our streams and perhaps cause more flooding.  The lake level can be held to the top of the power pool of 695.00 above MSL (mean sea level) which we have only ever seen once before in 2010.  Two units are also out for repair which means the C.O.E. could open the flood gates a bit to make up the difference for the units that are being worked on.  It did happen at the Norfork last week.  Tuesday those gates as well as generation were shut down.  Bull Shoals is also generating a weak couple of units of between 2,000 CFS (cubic feet per second) and 3,000 CFS with the lake level at 667.58  This level has stabilized at the moment as Table Rock Lake has also cut back on generation.   This past weekend I have fished both the White and the Norfork with catching on the White deteriorating from Saturday through Sunday and on Monday it pretty much sucked.  On Tuesday the Norfork fished much better.  Below are some of the fish we caught each day.  We did at least get a good fish each of the four days.

So if by some chance we get any generation above the normal 8 units of 25,000 CFS and the Corp of Engineers opens some flood gates that hit a CFS of 30,000 or more that is the time to get here as fast as you can and fish this really big water for brown trout.  In 2008 as well as 2010 the ratio of catching brown trout to rainbows was about 10 to 1 or 10 brown trout to every rainbow trout.  It was a blast for sure.  And trust me if this event does happen again this guide will book up those days really fast.  Now the first day of the gates won’t be any good as the water will be much to full of debris and dirty but the second or third day will be spectacular until the gates are shut down.

Book today for late April.  We do have some days open in May and June should be good for our Sulphur hatch as again this year everything seems to be running a bit late. 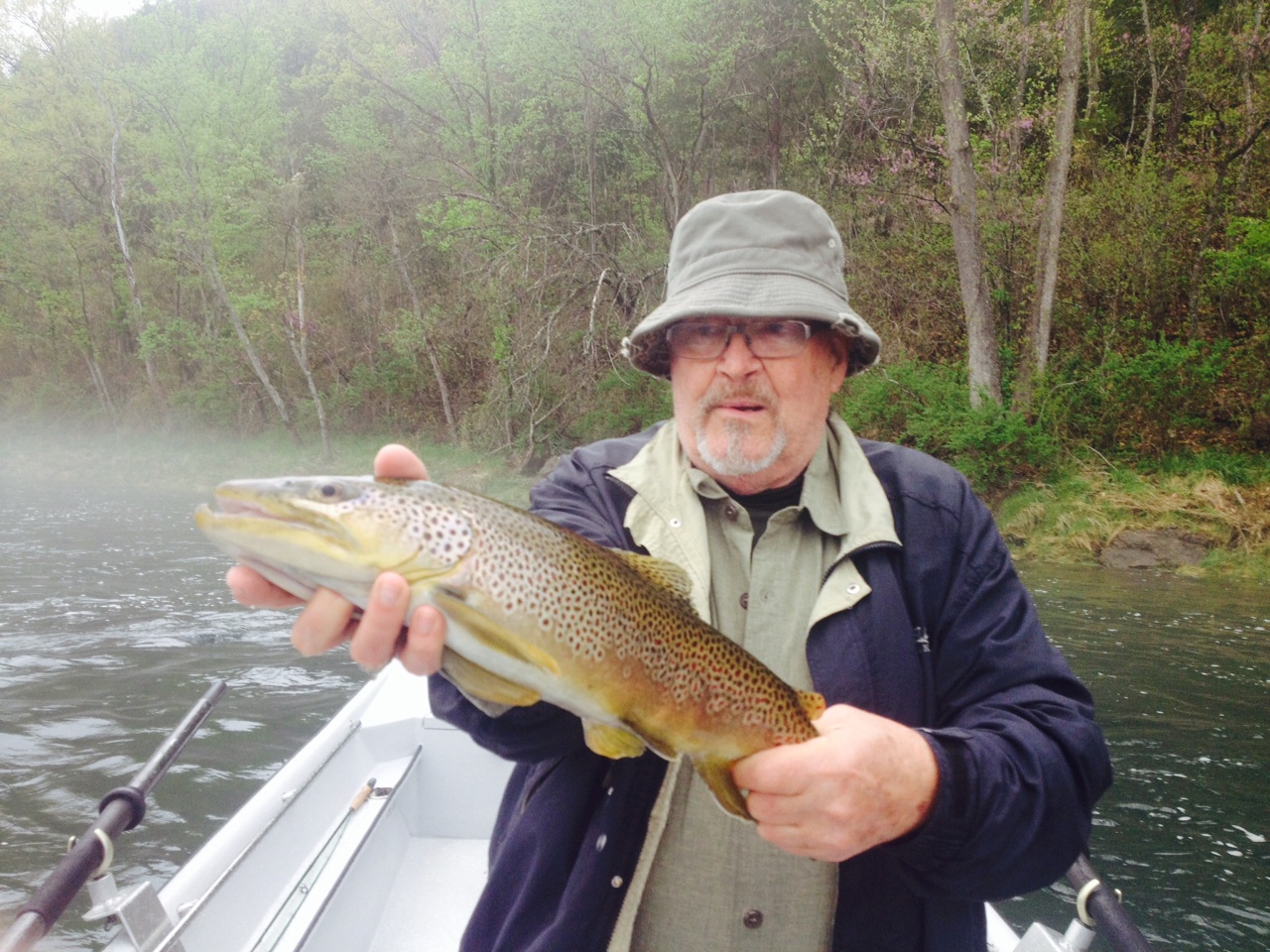 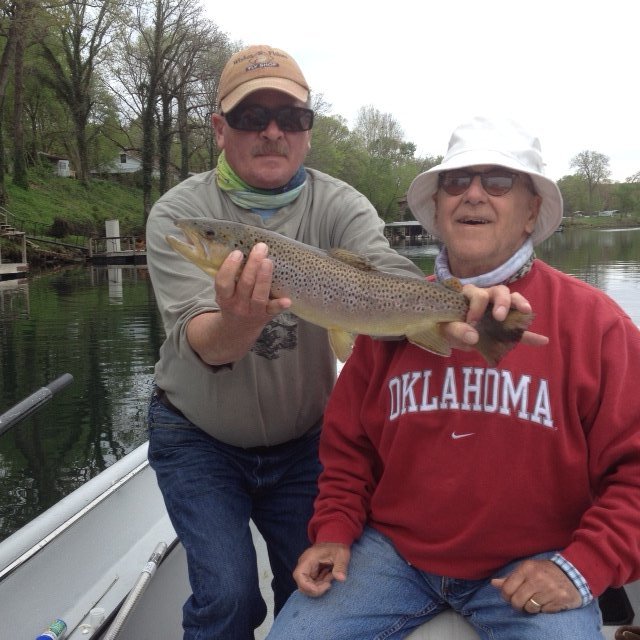 Got this nice letter from John pictured below THANKS JOHN:

Jim,
On Tuesday, April 14th, 2015, you guided for me and my fishing buddy, Skip Nichols. Things did not look good. The day before the White had been blown out by rain and high releases from the dam. You mentioned you only caught two fish all day. Skip and I were not optimistic. You decided we needed to try the Norfolk River. You immediately got us on fish. We had a good bite going and then you were notified that the release from the dam was going to stop. Again, not good news. This tends to put the fish off their bite. And the bite was just getting good. You headed back up the river to avoid becoming trapped by low water at the shoals. But Jim, you once again put Skip and I on great fish. Your knowledge of the river, knowledge of the fish and their locations, knowledge of the flies, leaders, and weights, and knowledge of the techniques needed to catch fish was excellent. Jim, I have been hiring guides for over thirty years from saltwater to freshwater, mountains to oceans, Texas, Louisiana, Arkansas, New Mexico, Colorado, Utah, Montana, Wyoming, California, Nevada, Florida, and Georgia. I have hired guides in Canada, Northwest Territories, Alaska, Hawaii, Cayman Islands, Bahamas, and Mexico. Of all those guides, you are the best. The skill of fly fishing for trout is important but customer service is even more important. You made our trip a truly enjoyable experience. We will be back. If you ever come to the Houston area for a fishing show please let me know. 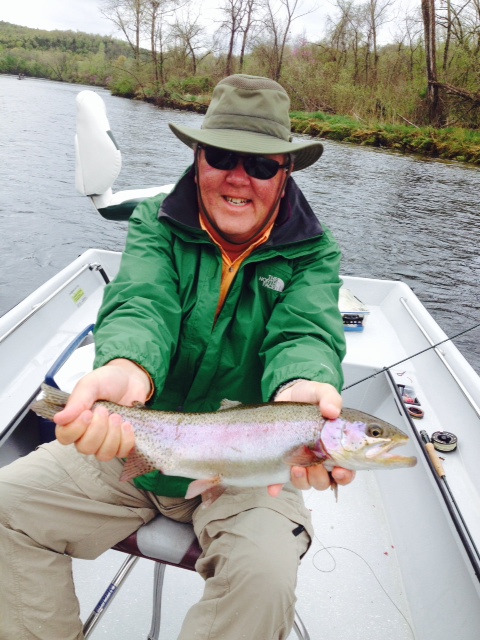 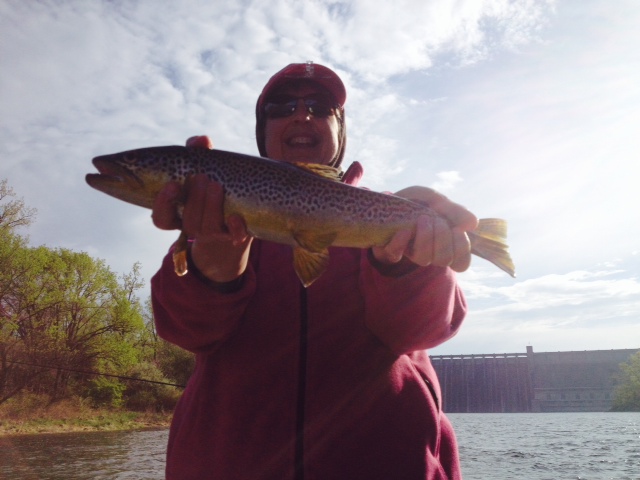