Unpredictable! That’s how I would describe the fishing on the White River for the month of October. I know! It sounds odd in that fishing is usually described that way but it is October and that’s normally the way October is. One day the catching is great with lots of strikes and hook sets and then the next day with the same conditions, same water levels, same weather and in the same places one can hardly get a strike. Then go back the next day and WHAM! catching is good again. Of course on the White a conduit gate was opened which DID affect the catching as some warmer water was flowing. It was very noticeable if you put your hand into the water. It also pushed back the spawn which is now finally starting to happen. The conduit gate is finally closed after being open for about 10 days total. We were wondering if those gates were going to change the walk in area on the Marion County side. It does not appear that it has other than to knock down some of the rocks on the rock pile that has grown over the years.

The Norfork on the other hand was a much more predictable fishery with very little fluctuation of the flows and a steady 44-48 MW. The catch rates were pretty steady until most of the fly guides began to fish over there and the sheer pressure of the numbers of boats would put the fish down somewhat. However once the boats spread out along the entire river catching picked up again. The flows over there then began to change when the lake level dropped down. Wade fishers were reporting some hot action when the water was shut off at the handicapped access as well as at the dam mostly above the ramp and well below the ramp. It looks to me that the area near the ramp is pretty much devoid of fish.
As november moves into December we should see even more wadeable water as the lake levels drop. If of course we just happen to get a deluge of rain that will all change as it usually does. We are moving into tying season and as the weather gets “iffy” we tend to tie flies. A fresh shipment of tungsten beads will be in by November 10. Don’t forget to drop by the shop and check out the new fly lines and accessories that arrived in October. We’ve got lots of 3,4,5 and 6 wt lines from floating, intermediate and sinking lines. Sylk lines for fiberglass and bamboo fans as well as a really sweet Retro reel for boo and glass fans as well and would make a great christmas gift. Call the shop for more info at 870-445-3848. 8 till 4 Monday through Saturday. We are moving into winter hours this month and in december will be closed Sunday and Monday.

The Retro I (3/4 wt) below priced at our web shop at $70.00 with free shipping.  Machined from 6061 T6 aluminum with an anodized finish, adjustable click drag. Changes easily left/right retrieve (no tools required) quick release spool with exposed rim.  Retro I 3.1 oz  Retro II 3.35 oz  Both available in the shop or at our online shop http://theflyfishing-store.com  Or call the shop 870-445-3848 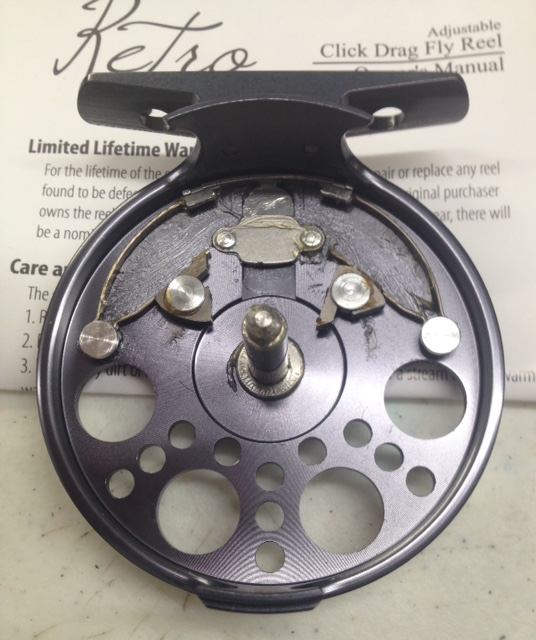