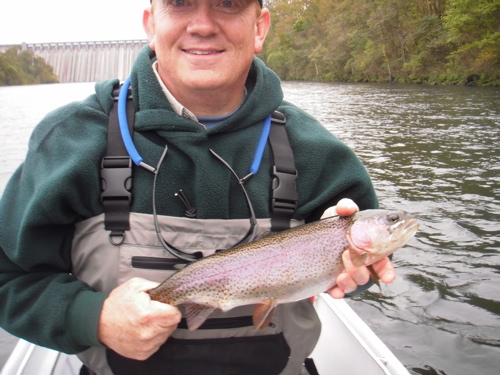 Fighting the wind last weekend made it tough to drift fish. Friday was especially brutal with saturday not quite so bad. Fridays gust were up to 25 mph but the bite was good in the am and a little slower in the afternoons. We had a family from Texas 4 folks and three had never had fly rods in their hands. Alas, three more addicts added to our ranks. The second day was much better than the first as casting, setting the hook and playing the fish became much easier on the second day with fewer fish missed on that day. Good job Amy, Kevin, Dottie and Ron.
This past sunday at the dam was good and once again I had a fisherman who had never had a fly rod in his hands. Dirk had a good day at the dam with two good bows over 17 inches landed and two good fish that managed to get off the hook. Another addict added to our ranks. This pic is of Dirk and his best fish of the day.