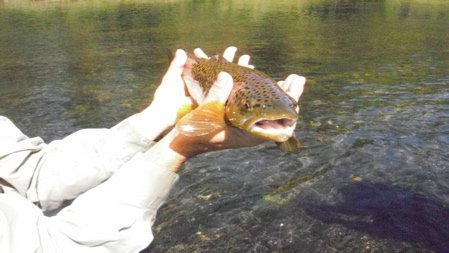 Looks like both dams will not generate till around 5:00 pm this afternoon with Bull Shoals generating for three hours and the Norfork for one hour.  It’s starting to look as though we are going to get a low water weekend.

Love the low water sight fishing in “The Spot” as I call it.  It is one of those places I talk about in the article “Fishing For Trophy Trout On Low Water” where big fish congregate but have now where to go due to a rock ledge or some other structure holding these fish in place.  Steve and Matt were perfect for this set up as they are both outstanding casters as well as great fisherman.  It does help to have a cast of 50 feet in some of these situations and in this case it is a must. It is also important not to slap the water too much with the fly line so as not to spook these fish.  We did spend about 6 hours in one spot sore lipping a bunch of rainbows before Steve and Matt got into the bigger fish which was after lunch.  We did hook and land a couple of 17 and 18 inchers before lunch with the most action on the big boys just after lunch.

All in all Matt and Steve hooked and landed 9 brown trout before the day was over.  At about 2:00 pm the catching really slowed down for us.  We did move to one other spot and spent 30 minutes attempting to catch a 26 inch rainbow but to no avail.  After many flies and tons of cast the bow moved away. 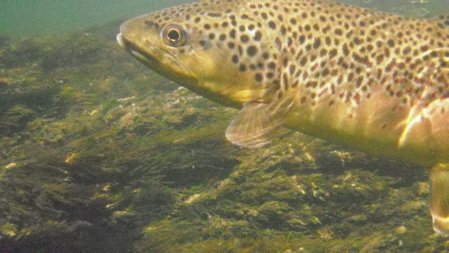 We did use lots of different flies on this day and had to change about every 45 minutes or so.  The two biggest fish came on a Red Ass fishing upstream with a #6 shot and 12 feet of 5X tippet below palsa indicators.  I like to fish uncrowded areas so I did use the boat to get around to areas that do not have any public access and there were only two other people in that area.  It sure is nice to find a spot to fish during conclave with no one else around and no other boats or guides around.

Some of the flies we used besides a soft hackle were John Wilsons Trout Crack, Leonards Roo scud, the Planarian, loop wing gray emerger, SJ worm in the Wapsi worm color as well as the wine colored worm and the WD-40 midge emerger.  This is one heck of a fun way to fish and I like to tell my fisherman that catching rainbows is a by product but it does add to the fun. Don’t know how may “bows” the boys hooked and landed but the action was pretty steady for most of the day.

Many thanks to those of you who dropped by the shop during conclave.  I did meet some more fishers with whom I’ve spoken with via e-mail or on FF bulletin boards so thanks to you for coming in and introducing yourselves.  Looks like it was another good year for conclave with generation cooperating and allowing lots of fishing on both rivers.

Don’t forget to check out the fly shop page for a special on hooks.  Drop by or pick up the phone and order.