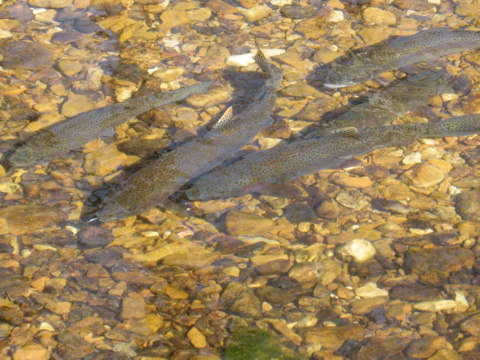 Funding for national fish hatcheries at Norfork and Greers Ferry still is much in doubt after 2012, despite the appearance Thursday at the Mammoth Spring National Fish Hatchery of a U.S. Fish and Wildlife Service awash with money.

Hundreds attended a ground-breaking ceremony for the future site of the Aquatic Conservation and Education Center at 302 Fish Hatchery Lane, according to The News, Fulton County’s newspaper of record.

FWS, the same agency that leases and operates national fish hatcheries at Norfork and Greer Ferry, have dubbed the new facility “the most energy-efficient buildings ever built by the U.S. Fish and Wildlife Service.”

The Mammoth Spring project, funded by American Recovery and Reinvestment Act 2009, was applauded by representatives from the offices of First District U.S. Rep. Rick Crawford and U.S. Sen. Mark Pryor, the state’s senior senator. The project has been in planning since 2002.

Meanwhile Thursday, Craig Eaton, director of the Norfork National Fish Hatchery, toldThe Baxter Bulletin some $5 million in deferred maintenance items for the Norfork hatchery may be a sticking point in discussions about future funding for the facility between the FWS and the U.S. Army Corps of Engineers, owner of the Norfork Dam and hatchery.

The big-ticket maintenance item for the facility he inherited with the job in July is repair for a series of six underground pipes that carry water from the hatchery runways to Dry Run Creek that flows from the hatchery.

“I’m a biologist, and the guys here before me were biologists,” Eaton said. “This is work for an engineer and it’s been deferred for at least 10 years.”

CADDIS HATCH:  Fluctuations as well as rain and cold fronts have put a bit of a damper on our caddis hatch.  Perhaps with this weekends warmer weather and sunshine we will see more.