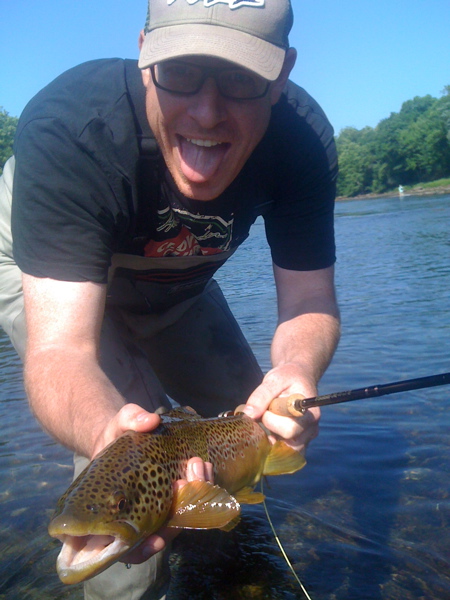 Below is an excerpt from the North West Arkansas Online newspaper.

FAYETTEVILLE — The call from Bull Shoals-based guide Jimmy Traylor came early in the week. Looking back, there were no hints that it could be anything special. Jimmy T wanted to know if I could bring two friends with me to fly fish Saturday.

Reed is my fishing buddy from North Little Rock. He’s guided before, but is more comfortable now in his role as the premier fly fisher on the White and Norfork rivers.

Campbell, head football coach at Sheridan High School, is along for amusement. He’s a constant reminder that you can wade fish 12-14 hours in a day with two replaced knees and survive. He gives us grief when we shut down at eight hours, but we don’t get night leg cramps as often.

Looking back, I have a better picture of what Jimmy T wanted — pictures of big fish. He had taken clients into his honey hole for several weeks.  They were catching a few, but Jimmy T thought experienced fishers might give him something special for his FlyFishArkansas.com blog and photo gallery.

“He wanted a team of all starters,” Reed deadpanned. “He needed us to close the deal.”

Mission accomplished. Check Jimmy T’s blog. The goal was to land 25 browns out of that spot. We got 31, several above 23 inches. I called it a 20-20 morning — 20 browns over 20 inches. I’ve never had a day wading that came even close.  There are pictures to prove it. We didn’t even count, measure or talk about the rainbows — much less take any pictures.

We were in Brown Town and we were focused on Jimmy T’s assignment. We joked that our 18-inch browns didn’t qualify for any photos after about 10 over 20 inches. The 17-inch fish were talked about badly. We released them and told them to go back to dinkville and out of our hole.

It rivaled a boat day last summer. He took three of us for a day of hopper fishing on a fly rod between White Hole and Cotter.

Jimmy T can repeat our morning. He said there are places in the White River holding pods of big browns and a pheasant tail nymph will fool them, probably all summer.

I can’t reveal his top spot, other than it was below Bull Shoals Dam.

That’s kinda like saying you fished in the Rocky Mountains, somewhere north of the Canadian border. But Jimmy T can find my truck at a river access point. And I’d like to get another invitation — when my shoulder stops aching from fighting big browns.

Last Tuesday Tanner and Nate from Utah came over to the White River to fish for the day.  Those two were on a roll with 19 brown trout landed and 6 that broke off.  Here are some pictures. 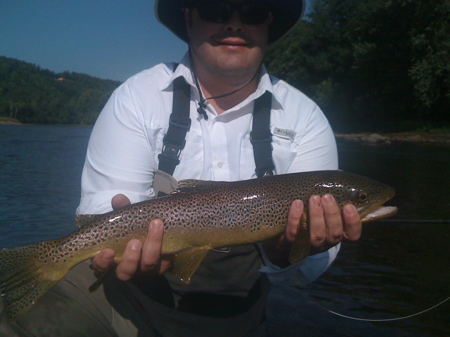 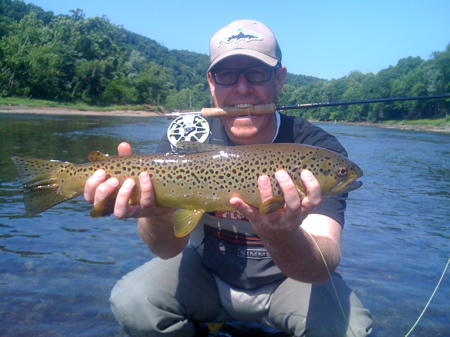 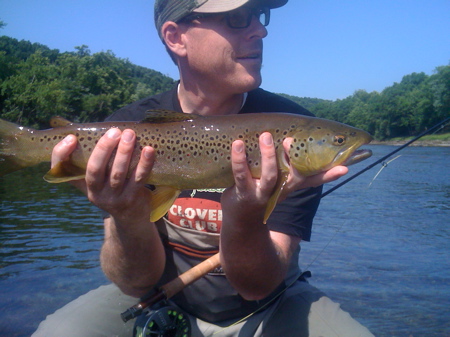 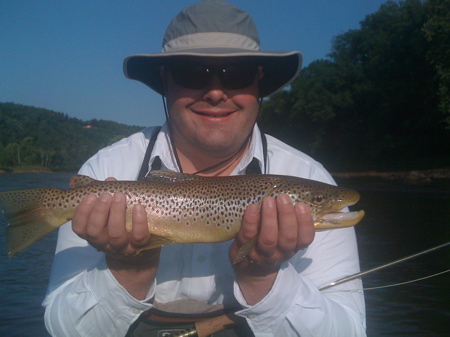