Generation levels continue to be in the 6 to 8 unit vicinity with levels lower in the evenings and early mornings and rising with peak power demand in the afternoons.  This of course is normal as we get further into our summer hot period.  The lake level at Bull Shoals as of this writing is 691.60 feet above mean sea level and rose about a half foot due to yesterdays rain showers.  The Norfork lake level is 575.80 feet above mean sea level with some shut downs of generation during the evenings with generation starting up again in the early mornings around 8 am.  The norfork has been inconsistent in it’s fishing for most of the month of june while the White has been a little more consistant and predictable.  Heavier flows are however bringing a constant supply of food to the fish which are growing at a rapid rate.  The fish on both rivers look like they have swallowed small footballs.  San Juan worms, the dynamite worm, eggs, and some midges are producing some good fish along with some brown trout (see trip gallery).  Pretty much every day I’ve guided we’ve landed some of these brown trout in the 18 to 23 inch range but it was a little tougher during the full moon phase.  Long leaders are the key to hooking the fish and getting down to them along with some good size shot, proper indicators, the right fly,  keeping an eye on the fluctuations of the flows and being in the right stretch of river where the fish are all lead to a successful day of fishing.  As one of the few guides on the river with extensive experience in all the aspects of fishing the White River and with the knowledge of the bottom structure and how the fish move with different flow rates; success is achieved.  We are landing some good brown trout as well as some fat bows with numbers of fish in the 30’s and mid 40’s range per day.  On days when the browns bite well those numbers fall but then hooking and landing some good brown trout isn’t a bad trade off.   The C.O.E. (corps of engineers) is predicting the lake level will reach normal pool elevation of 654 feet by september and my own guess is by mid late september.   As August and September approach we enter our hopper period which is a lot of fun on high water.  We also sometimes get a summer shad kill after labor day weekend with 7 & 8 unit flows which is probable this year with the amount of water in the lake and the rain we keep getting.  The rains will taper off as june ends and we enter july so we should see the lakes begin to drop rapidly.  So pick up the phone now and call 870-404-8906 and book your fishing trip early.  Good fishing. 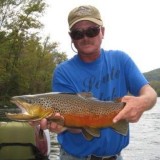