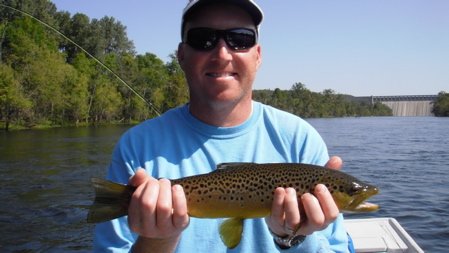 Mike and Fred Son and Father fished Wednesday and did pretty well with some good fish hooked and landed near the Dam (seen in background).

DO or dissolved oxygen on both the Norfork and Bull Shoals lake is pretty low this year much like is was in 2008 which was another record breaking high water year.  300 fish in the Protem area of the lake were found dead and like most years there are always some fish that die off in the lake each year due to hypoxia.  Thus far no fish kills have happened on the White or Norfork rivers but some problems to exist at the hatchery.  This problem will fade away with cooler weather and the lake turnover.  On Bull Shoals Lake a complete lake turnover has not happened since 1982 but our lake arms do turn over pretty much every year.  This year more of the lake is turning over and in particular more of the main lake further upstream has turned over.  Cooler temps and some pretty good rain fall over the past week have helped bring the lake temps down from the high low 90’s back into the 70’s

Generation has continued at a consistent 16,000 CFS up until a few days ago when generation dropped for a short time during the early morning hours to 2,000 CFS (cubic feet per second ).  The lake level is at 459.61 or 5.61 feet above the normal generation pool.  Beaver lake is a foot and a third above it’s normal pool with some no generation water most of the time and Table Rock Lake is just below the normal pool elevation of 915 and is at 914.44 with generation of between 1,000 CFS and 3100 CFS.  I think a lot of folks are expecting generation to cease when BS lake hits 654.00 but I for one am not counting on it.  Perhaps the water will be off during the conclave some but I think we will be seeing some weak generation in the one to three unit range.  Just a gut feeling with no real facts to back it up except experience but I trust my gut more than the rumors that fly around when my fellow fly fishers are chomping at the bit to stand in the water.

Fishing is still pretty good with some slow time until the fog lifts and the sun comes out but the fish are fighting a bit better further down stream where the O2 is a bit better.  SJ Worms, Scud, Sow bugs in large sizes #14’s on long CFC tippet Maxima 4X with two BB shot placed just right is doing the trick on lengths of 10 1/2 foot or so.

Conclave will be upon us soon so be sure to drop by the shop.  You’ll love our selection of beads, hooks, leader and tippet and indicators.  Specials for the avid fly fisher will abound.

We have a few days left in October but if you are looking for a guide the week of the conclave good luck finding one.  Conclave is Oct 6,7 & 8th.