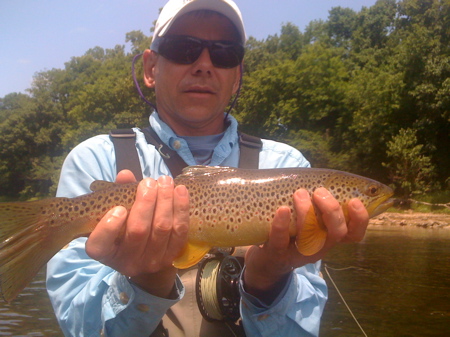 To say the fishing has been good would be a gross understatement of the productivity of the White River in Arkansas below Bull Shoals Dam.  Not only have folks been coming in to load up on flies like the “Sublette One Fly” a pheasant tail soft hackle and the “Gonzo Midges” in size 20’s and 22’s but these fisherman are actually complaining about how tired their arms are from catching so many fish!  It’s a good problem to have for sure and amongst the fly fishing crowd this is not really a complaint but just another way to brag a bit and it’s music to our ears for sure.  It beats the woe is me the water is too high to wade complaints so we’ll take the my arm is tired routine for sure. 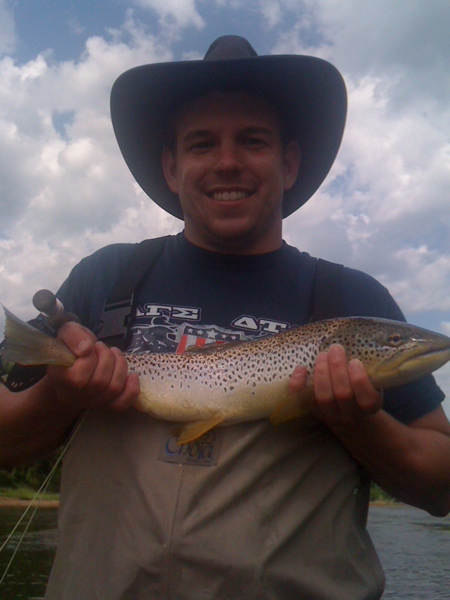 This past wednesday was just such a day as father and son Jim and Jonathan from the St. Louis area came back to fish the White and did they pick a good day with cooler temps and fish that cooperated all morning long.  Upstream nymphing with PT’s (pheasant tails) in #14’s and 16’s (didn’t seem to matter what size) using Maxima fluorocarbon tippet (5X) on the new 110 yard spools as well as Maxima 9 ft Knotless leader produced some outstanding hook up’s that lead to a 20 brown trout morning for these to gents.  I love it when fisherman say “that’s the biggest brown trout I’ve ever caught” and then on the next cast get to say it again ’cause that fish is 20″.  After a few more 18+ inch fish to the net you know your fisherman is having an outstanding day when as the guide I ask “got another big one?” and he says “Nah! it’s a dink about 15”  with one huge smile on his face of course.  It’s tough to beat a morning like that one but it’s been pretty consistent the past few weeks and should stay this way with current water generation schedules. 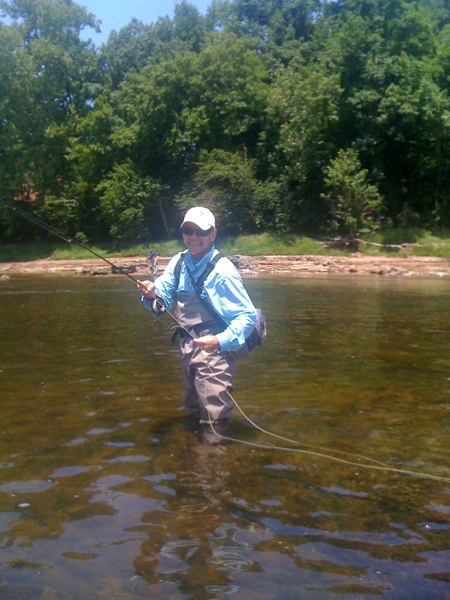 Some rain the past three mornings did bring the lake up just a bit above the 654 foot level but I don’t think it will affect generation much as I’m pretty sure the next time generation happens at night it’ll be taken down.  Looks like we are well into a low water wadeable year thus far and I don’t see any changes unless of course we get some epic type rains.  However look for some odd generation to occur to cool the river down when it gets a bit to hot.  We call it “fish” water or some crazy generation for a couple of hours for no apparent reason.  It looks like it’s gonna be normal for this summer. The shop is loaded up with flies and you’ll love our prices and service.  Don’t forget to check out our web store http://theflyfishing-store.com We will be running various specials on the weekends so don’t forget to check them out when you drop into the shop.

Book a morning or a day and get in on this pattern we have going at this time.  The flies will change with the hatches but this pattern that is going on now is well worth booking a trip for.  Avoid a weekend if you can.  I’ve got all the gear (rods, flies, leader, tippet,act) that you’ll need.  I’ll show you how to do the drifts, play the fish, land the fish, manage your fly line & improve your casting ability.  What a deal!  Call 870-404-8906 and we’ll talk fishin’

State Park News:  Starting June 11 the state park boat ramp will be shut down during the week but OPEN on the weekends until June 24 for some much needed work to the cooking area and to remove the gravel underneath the boat dock.  The tackle and gift store WILL STAY OPEN during these times and will not shut down.  Only the boat ramp and the boat dock will be affected.   The dock will be moved out further into the river and the area next to the break water that got torn up during last years flooding will be fixed.  The gravel underneath the dock will be moved further down stream below the “new” log that lodged into place just below the ramp.  So during these times there will be lots of big equipment moving around during the week which will facilitate the closing of the boat ramp and the boat dock.  The ramp will be open Saturday and Sunday.