Saw our first caddis yesterday afternoon at Bayless Island late in the afternoon.  We did only see a few and the fish were not yet keying in on the dry version but were taking the cream midge off the surface. Time to put the Sidewinder midge on and give it a shop.

On Friday we put in on the upper end of the river yesterday morning on some weak generation of 2 units.  The water was very dirty and trashy so Rick and I made a hard run to get in front of the water.  We caught the rise at three chutes but made a run to the narrows where we had the bottom of the hole to ourselves.  On Ricks first cast he had a fish on.  We stayed there until the water hit us and made another run to “The Drop Off” and once again got into fish.  The wind began to pick up a bit which would have made it hard to fish a couple of other spots we had in mind so off to “Miller” hole we went staying in front of the water (it’s really hard to do this kind of fishing in a drift boat).  Rick fished until the water came up and we took out and headed back upstream to wade fish again where rick hooked and landed his 18 inch brown trout. 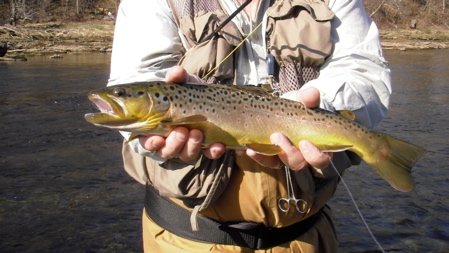 Ricks 18 inch brown trout caught on a Randy Sublett “One Fly” using a bimini twist leader 3 wt rod and fluorocarbon tippet.  The fish in this spot were rising like crazy on midges.  While Rick was fishing I did hook and land a few on the CDC Loop wing emerger fished on the surface.  Oh! that is so much fun. 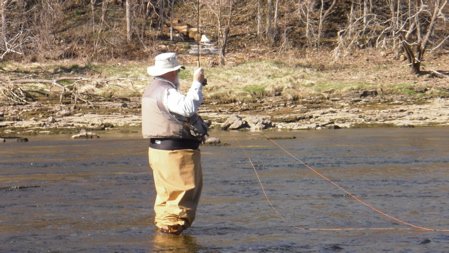 This is rick fighting his brown trout on his 3 wt rod.  Rick has been fishing with me for 12 years.  He is very happy that generation is down for a change so we can continue our float tripw down the river.

The weather has turned nice with our highs today hitting 71.  Should be almost as nice again today.