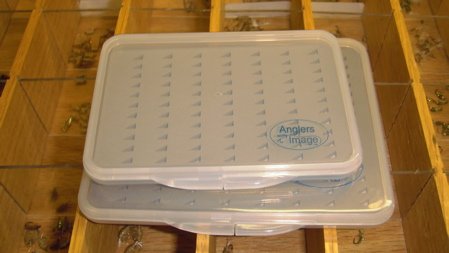 EXCLUSIVE: FRIDAY and SATURDAY ONLY The Davy Wotton Midge Collection in a pocket sized fly box which is free.  Includes one dozen shimmer midges 6 in grey and 6 in black both size #16.  6 ea pearl midges barbless, 6 black super midges barbless both #16 and a dozen white tail midges 6 in black and 6 in red and both are tied on #18 barbless hooks.  Ready to fish at the Dam on Feb.  Reg Price on the midges $81.00 Special Price including Fly Box $63.00 and we’ll ship it to you for only $2.00  Limited quantities of this special so when they are out it will take some time to get more of them back in stock.  Call the shop 870-404-8906 and get yours today before they are sold out.

TMC 206 BL 100 count hook.  We are discontinuing this hook in the shop and have the price greatly reduced. See the fly shop page for more information.

Once again this winter until August one lane of the road on top of the dam will be closed off and on for who knows what kind of work this time around.  It will slow you down because you have to wait at the stop light. This will be the third year in a row for closures. It will begin after Thanksgiving.

It seems that each year our spawn on the White River gets later and later.  Don’t really know why except that in “08” which was a flood gate year all the fish spawned in December during a short 3 week period.  Not quite the same this year but we used to see spawning activity on the upper end towards the end of October and November was always a hot and heavy time.  Except for the rim shoals area and some spots in cotter (rainbows) I have not seem much activity.  I hope the warmer than usual water temps and flood gates don’t hinder this annual activity.

RAIN:  It rained all night and we had 2 inches of rain at the dam with another 1/2 inch the day before and the lake is rising and as of 6:00 am this morning it is up to 653.90 and is up 3/4 of a foot in a 24 hour period and I’m pretty sure it will continue to rise through the day.  The water was off this morning when I crossed the dam.

Some news about the hatchery and Oxygen Diffusers

NORFORK — Trout fry in the Norfork National Fish Hatchery are about to get their gills tickled by waters richer in oxygen and lower in concentrations of hydrogen sulfide and nitrogen.

An effort is under way to install 24 diffusers that have been demonstrated to increase oxygen levels and reduce hydrogen sulfide and nitrogen to nonlethal levels in hatchery waters.

Sixteen diffusers invented collaboratively by hatchery maintenance personnel and volunteers from Friends of the Norfork National Fish Hatchery and North Arkansas Fly Fishers were under construction at the hatchery last week.

The volunteer effort has been led by Mike Jirka from Friends of the Norfork National Fish Hatchery.

U.S. Fish and Wildlife biologist Craig Eaton, manager of the hatchery, said the diffusers are to address the annual natural phenomenon of low oxygen in lake waters that feed the hatchery raceways. The low dissolved oxygen in lake waters stratified by temperatures beginning in the fall causes the waters to be generally out of kilter in mineral and other gas content for the purposes of producing healthy hatchery fish, Eaton said.

The poor water quality that gives rise to gill disease and a couple of killer parasites has claimed around 20,000 fish a month since the annual event began in August.

The diffusers could recoup their cost in one harsh dissolved oxygen event in terms of lost fish saved measured at an estimated 50-cents per fish.

“Just from what we’ve seen from the two test units, it’s working right there,” Eaton said. Similar diffusers also have saved fish at other federal hatcheries plagued by poor water quality in the fall, he said.

The outcome of improved water quality also is measured in healthier fish at the time they are stocked into the White and North Fork rivers.

“If we can’t release healthy fish, they don’t stand a chance in the rivers,” Eaton said.

Jirka, measuring oxygen content below one diffuser placed into service last week, found oxygen content increased by 15.17 percent. Eaton said the 9.79 part-per-million oxygen content is a healthy level, but the diffusers in the hatchery are a greater value for helping to rid the waters of excessive hydrogen sulfide and nitrogen gases.

Jane Darr, president of Friends of the North Fork and White Rivers, and Mike Tipton, president of North Arkansas Fly Fisher, also were on hand last week for the construction start. Both said the hatchery and quality of hatchery waters are critical to fishing and the well-being of the region around the rivers. They said all individuals and organizations are stakeholders in a long-term solution for hatchery problems.

Alexander said the diffuser project is a milestone for the hatchery friends group on the scale of construction in 2009-10 of an elaborate walkway along Dry Run Creek that flows from the hatchery and provides some of the world’s best trout fishing for disabled anglers and anglers younger than 16.

The group saved from $2,000 to $4,000 per diffuser by building its own diffusers from flexible culvert and polyvinyl pipe with a core of circular steel grates that hold plasitc baffles and aerate the hatchery waters. Hatchery maintenence man Donald Beard and facility operations specialist Doug Anderson created a jig or form to accommodate construction of the diffusers, Eaton said.

Dissolved oxygen available to the hatchery from Norfork Lake on Wednesday ranged from zero parts-per-million to 5.6 ppm. The state’s water quality standard for oxygen content is 6 ppm. Oxygen levels were similarly low in areas that feed hydroelectric generators in Bull Shoals Dam.

Greater challenges that lie ahead for the group are funding for hatcheries built to mitigate fish species lost in the construction of the U.S. Army Corps of Engineer dams which is threatened by a Congress determined to cut federal spending and by federal agencies that disagree over funding and operating the hatcheries.