I put in at Wildcat yesterday and discovered some pretty mossy water at Tucker Shoals and the bottom of the Narrows.  We tried to fish but to no avail so we made a run to find clear water which we did at Cane island.  We drifted 20 yards and had our first fish on.  The catching was now on as Hank and Shirley went to town on the fish putting some good numbers into the net.  After lunch at the State Park we began our first drift for the afternoon but the water was coming up and stirring up the moss again so we stayed in front of it riding the small rise which was also very productive.  We fished our way back down to wildcat and came across this young lady on a stand up paddle board.   A first for me in the 18 years I’ve been guiding on this river. 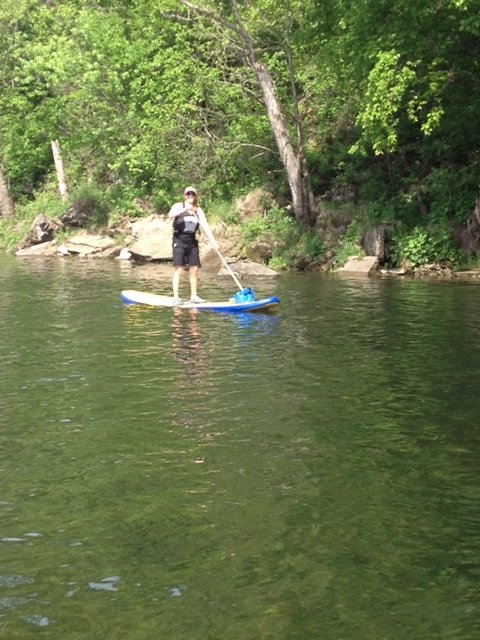 I asked her how much practice it took to stand on one and she said it was easy.  Looks like it could be tough to fish from though.

Looks like some continued weak generation of up to 3 units is the new pattern.  Bumps in generation are causing mossy conditions for sure and when it hits the area you are fishing it might be a good time to go n search of cleaner water.  Caddis of various types seem to be doing the trick in colors of green.  A dark green dubbing on a TMC #16 with a copper bead and chartreuse wire or a similar version with a flashback or Davys’ winged emerger are pretty good choices at the moment.